Bryanston was recently approached by Poole Town Football Club and asked whether it might consider supporting The Boot Room. 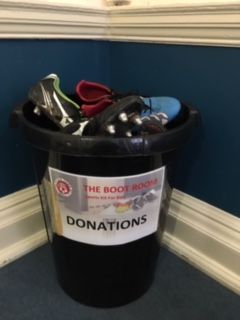 This is a charity which has been set up by the club to encourage local children, especially those facing physical, emotional or financial need, to become involved in the fun of football.

The club started last year but quickly realised that many children were unable to take part as they didn't have appropriate footwear or equipment. The Boot Room is therefore seeking to collect and redistribute good quality second-hand football boots and trainers for both children and teenagers.

Given that service to the community is an integral part of the CAS (creativity, activity, service) element of the IB Diploma Programme, the School’s IB pupils were asked whether they would like to oversee Bryanston’s role in this. Many responded straightaway and offered to publicise, collect and clean football boots and trainers for this worthy cause.

Each boarding house now has a collection bin and those pupils responsible for overseeing the bins spoke about the charity in house assemblies last week. Congratulations to Shaftesbury house for filling their bin already!