On Frdiay 10 November the Science Society were delighted to welcome Dr Gavin Hesketh for the last of this term's lectures, during which he spoke about what is happening in particle physics now. Here is Head of Science Dr Mike Kearney's report on the lecture.

Dr Gavin Hesketh studied at Manchester University and Fermilab in Chicago and is currently a lecturer and experimental physicist in the Department of Physics and Astronomy at UCL. His experimental work is based at CERN, using the ATLAS experiment, studying the highest energy particles ever produced in a laboratory. He has published many times, including findings about the legendary Higgs Boson, sometimes oddly dubbed the God Particle.

He has also worked on Stargazing Live and was a contributor to an award-winning Horizon programme about dark matter and dark energy. He speaks regularly at festivals and fairs and has written a layman’s guide to particle physics called The Particle Zoo.

His talk was about what is happening in particle physics now, mostly the work at the LHC at CERN. The discovery of the Higgs Boson was a successful seeking of the last of the theorised particles. Now we are in a period of uncertainty with many new questions and concerns about whether they can be solved.

Physics is the extreme example of understanding the whole universe from the simplest building blocks. The universe is made up of a small collection of particles, six quarks, six leptons and four force-carrying bosons. Understanding them should enable us to explain everything. The problem is that when we scale up things go wrong and figuring out what is missing is the current mission.

Particle physics is about 100 years old. Previously people knew things were made of atoms but thought they were indivisible. Around 1910 Ernest Rutherford and Hans Geiger aimed alpha radiation at thin gold foil. Some of the radiation bounced back off the small, dense atomic nucleus, something never before seen or theorised. The rest of the atom turns out to be almost completely empty with electrons orbiting like grains of sand in something the size of a football stadium.

The results didn’t fit what we understood about physics at the time. The electrons should spiral in to the nucleus and the atoms should collapse, so a new version of physics had to be discovered to account for this. Quantum physics did the job, but it is counterintuitive to our everyday experience. Solids can behave like solid objects or spread out like waves and their behaviour can only be predicted in terms of probability. At a similar time Einstein’s theories of relativity were developed and getting these two theories to agree is still a challenge. A key part of relativity is the equation E = mc2 and this transfer between mass and energy is crucial for particle physics.

In 1928 the Dirac equation proved the existence of antimatter and led to an understanding of how particles interact using the theory of quantum electrodynamics and Feynman diagrams. 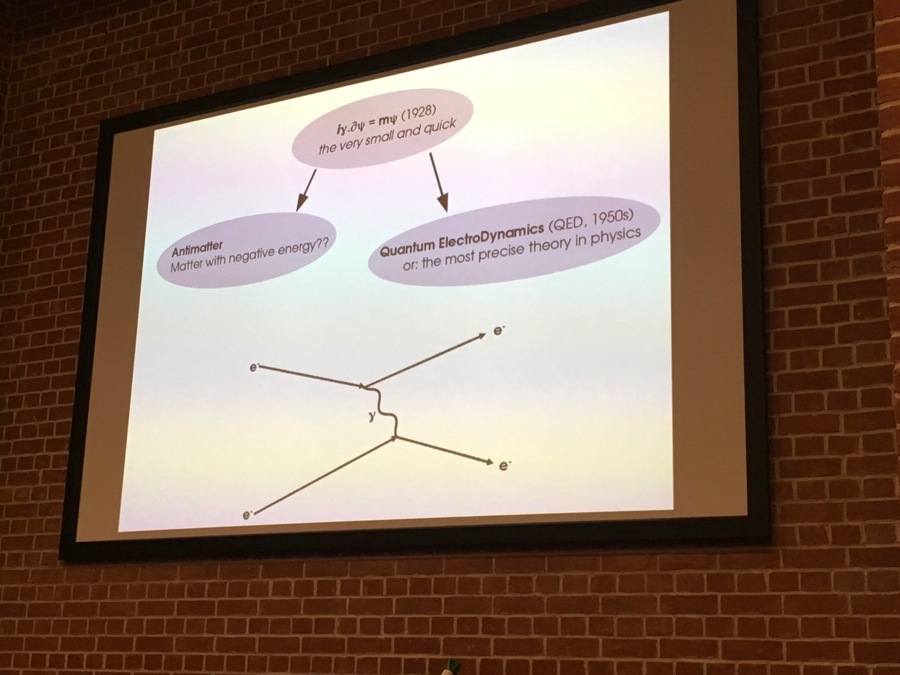 Victor Hesse was studying radiation and went up on balloon flights to get further away from radioactive material in rocks. But he found he detected more particles and discovered cosmic rays, particles from space. When particles enter our atmosphere, some of their energy can be used to generate new particles, new matter, with a shower of particles forming. This sort of collision is what is recreated at CERN. Particles collide and new ones form, but it is happening in an area surrounded by sensors.

Particle accelerators were built to mimic the cosmic rays and bigger and bigger ones were built to get higher energy collisions, with the LHC at CERN being the biggest. Discoveries included the confirmation of the existence of antimatter and then new particles that do not exist in normal matter. Muons, like heavy electrons and many hadrons, each made up of multiple quarks were discovered. The picture of fundamental particles was completed with the quarks, leptons and bosons. 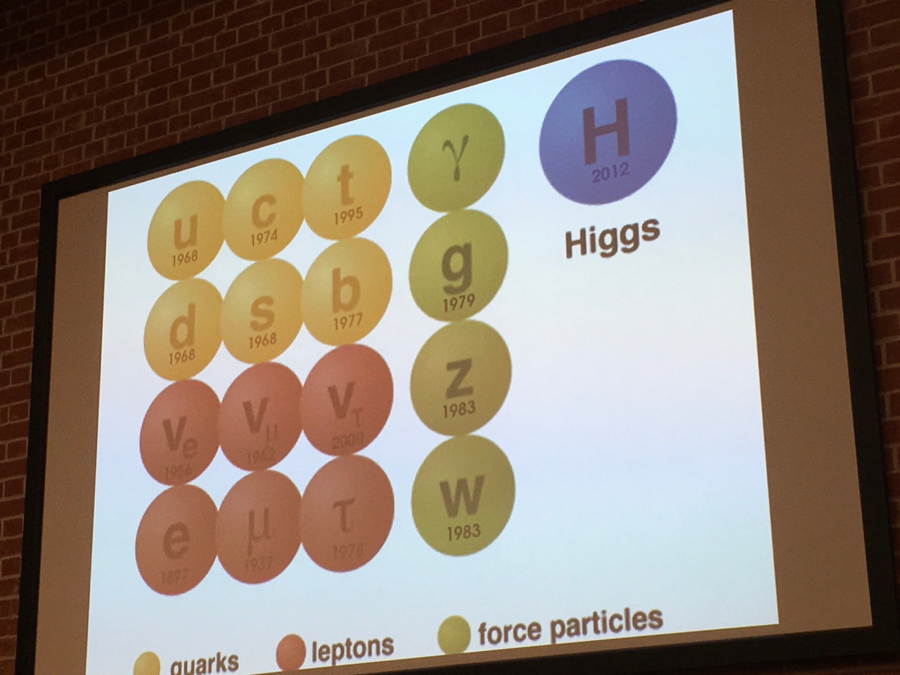 One thing missing from all of the studies and particles was an explanation of why things have mass. The Higgs Boson was the theoretical answer, a particle that stuck around others and made them hard to move, explaining inertial mass.

So once that was discovered a few years ago, does that mean we have all of the answers. Is there more to find?

Questions include why are there six quarks and six leptons? Is the number six significant? Why four force-carrying bosons? Does the theory explain everything, and the answer is no. We have no particle explanation of gravity. There should be equal amounts of matter and antimatter, but there is hardly any antimatter. Why?

A big question is the nature of dark matter. This is matter that can be identified because of the way it changes the rate of rotation of a galaxy. The visible mass does not explain how fast they are rotating, so there is a lot of hidden mass, so-called dark matter, and we don’t know what it is made of.  There is a lot of it.  The matter where we do know what it is constitutes only 5% of the universe. Dark matter is 27% and then the final 65% is dark energy, making the universe expand faster and faster, and we have no idea at all about what that is. Consider it to be like a detective story. We know there was a Big Bang and we know it created the matter we know, but how did it create the rest?

What theories do we have to test? Super symmetry suggests an extension of the standard model with super partners for every particle. Could there be additional dimensions of space and time? Or are there new particles or new forces? Could string theory be the solution for it all? 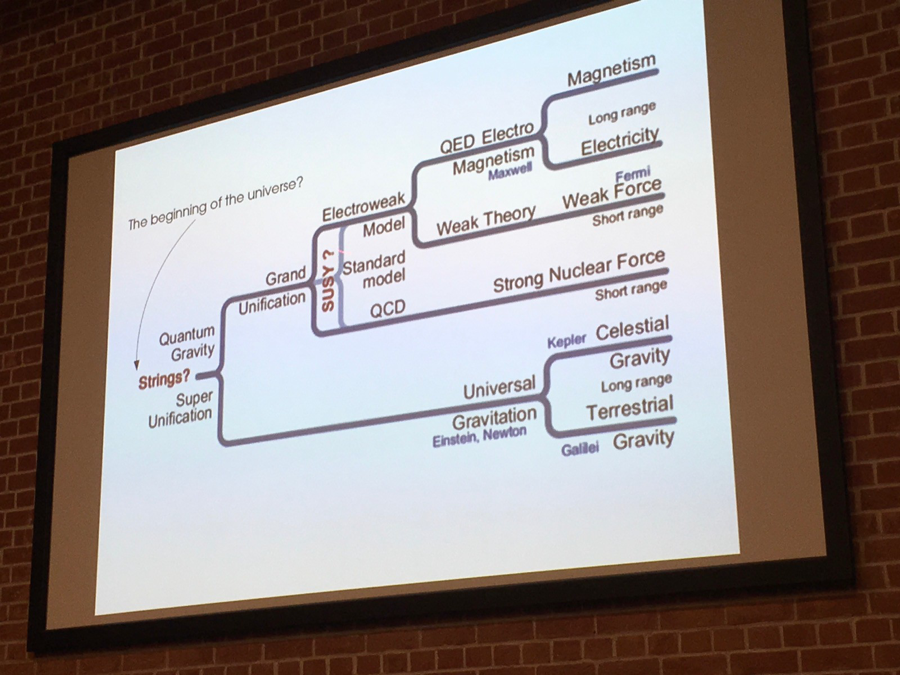 We work backwards from our current understanding to see if we can discover the most fundamental ideas from the evidence we can gather. The LHC has got us some way  back as the picture shows.

The LHC is an underground circular tunnel 27 km round. Protons are accelerated in bunches of millions of protons to speeds almost as fast as the speed of light. The beams collide and particles are emitted that are caught by huge detectors. Only 1 in 10 billion proton collisions will produce a Higgs Boson. We knew what the Higgs should produce. 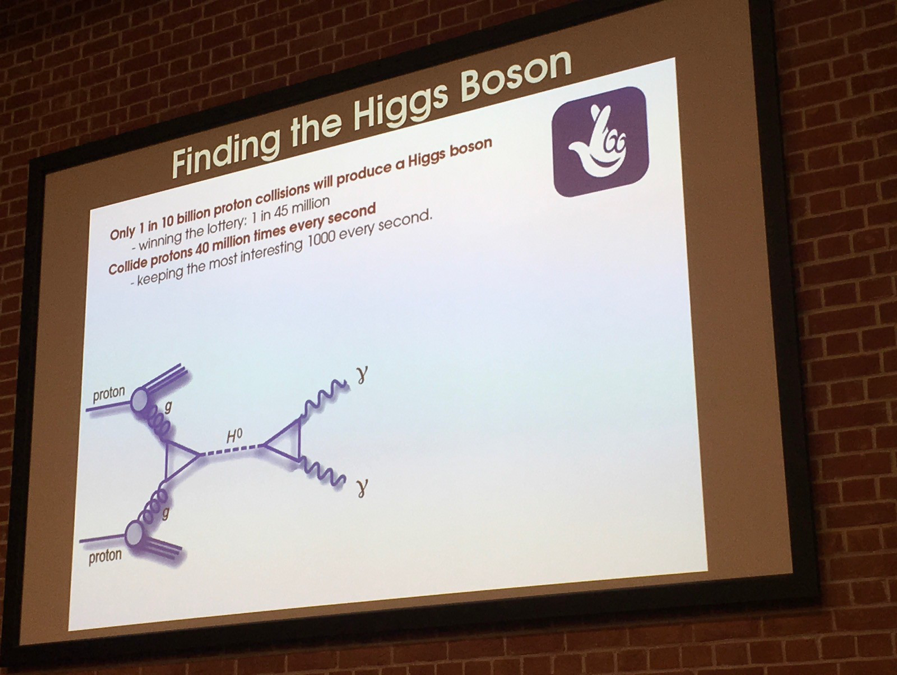 The gamma photons emitted were looked for as the boson decays too quickly to be seen itself. The detector is bigger than the lecture theatre but is like a vast digital camera recording millions of pictures per second, each collision produces a vast amount of data that is not wanted and has to be sifted for interesting results.

More recently a new signal in the data was discovered that looked like a new unknown particle was being revealed. The data needed to be confirmed but theoretical papers were quickly generated explaining the results, ten on the day the data was released and 400 before more data had been analysed. Unfortunately, more data revealed that the signal had vanished and was just an anomaly previously, despite the theoreticians. The excitement that there are new discoveries imminent is obvious.

We are trying to answer the questions detailed above and who knows what discoveries may follow. The LHC is set to run until at least 2035.