Sparkling autumnal sunshine, bright-eyed pupils, a hold full of instruments and baggage and we are off – the last coach for the London Concert – and on time!

The London Concert never fails to amaze on so many levels, and this year was no exception. Taking place in Holy Trinity, Sloane Square its Arts and Crafts atmosphere perfectly suited the Bryanston performers and audience. By the time we arrived, after a smooth journey on the last coach, the seemingly tireless music staff and pupils had already been there for some hours setting up and rehearsing. The last junior pupils were seamlessly shown to their places, given final rehearsals and ushered off to supper. This left time for an hour’s wander through Sloane Square, perhaps a visit to the Saatchi Gallery, and certainly many staff enjoyed the delights of the Lebanese Comptoir restaurant – great find Vicar!

Long anticipated hugs from parents and grandparents, a rushing to find the best seats to view a child’s performances, catching-up chatter and by 7 o’clock, Holy Trinity was already almost full to capacity with an excited rise in volume. With standing room only, and some parents even squeezing into the warmth of the annex, the concert began with aplomb to Casals' O Vos Omnes. Originally scored for men’s voices it was masterfully rendered by Will Ings’s Chamber Choir, accompanied on the organ by the skilful Graham Scott. This was followed by a complete contrast of Robin Hood; the excitement and thrill of the film score was brilliantly captured by full symphonic orchestra with powerful brass and included (unusually) saxophones. 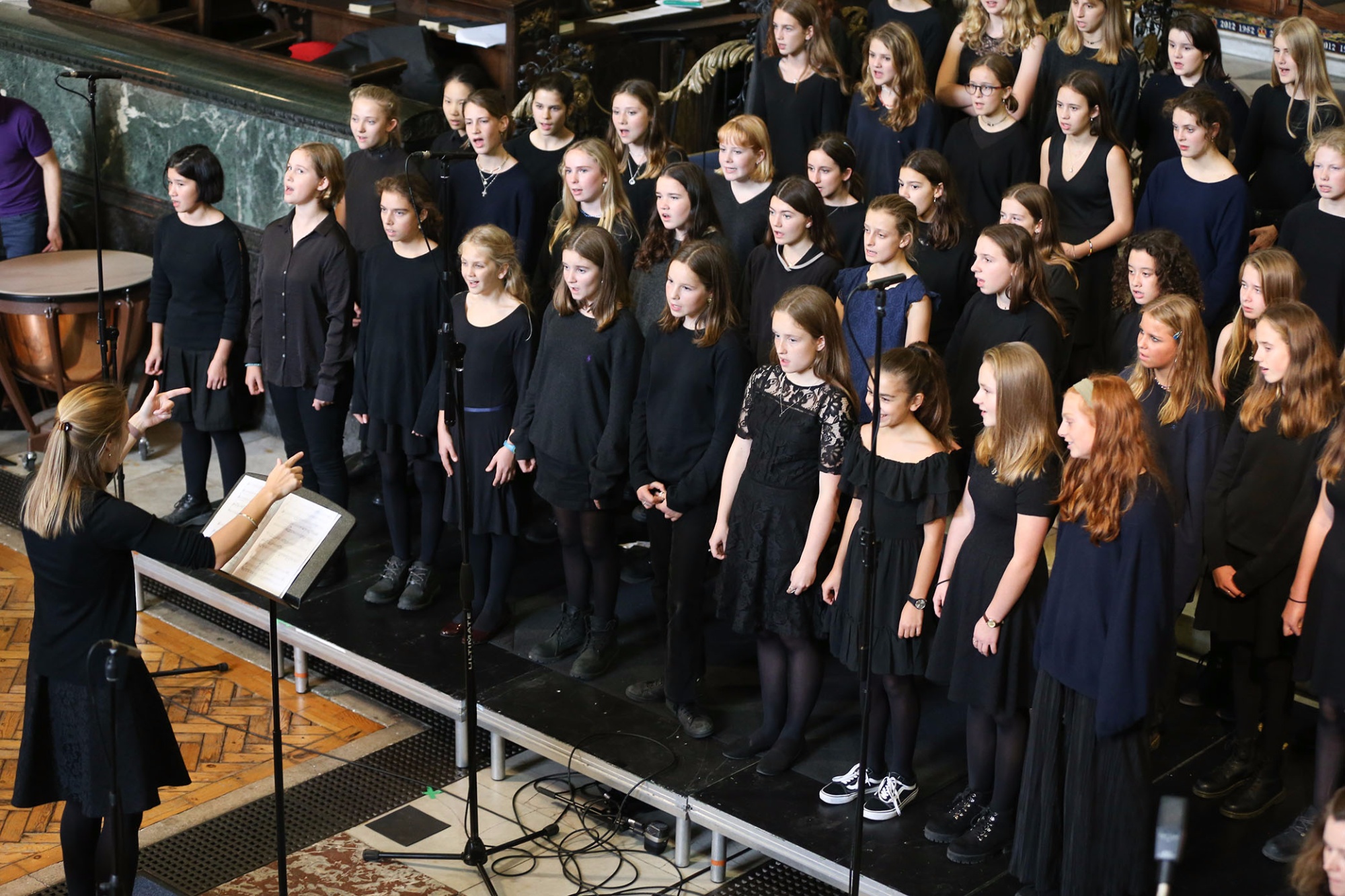 The London Concert is the epitome of a team effort, but certain individuals, supported by that team, should be mentioned. The soloists, Charlotte H, James FR, Bertrand EW, Lotte T, Samantha H, Sumei BS and May P all performed exquisitely and sensitively, all giving extraordinary performances. Charlotte’s was the first solo performance, and she set the stakes high with a clarity and emotion of Mozart’s flute quartet in D major arranged for full chamber orchestra by Christina Scott. James sang Mendelssohn’s Lord God of Abraham from the oratorio Elijah beautifully; he communicated the text with great sensitivity and maturity. Bertie performed the little known work Romanze in Eb major by Richard Strauss. He sustained the quality and tone of the melodic lines with great ability. Lotte then sparkled with a brilliant change of style - a charming arrangement by Duncan Emerson of At Last. Samantha led us into the interval with her total mastery of the second movement of Tchaikovsky’s violin concerto, Canzonetta.  Samantha played with her heart and having left her audience gasping, we were sustained with refreshments from Mike Thorne’s catering team – my goodness, they do look after us! 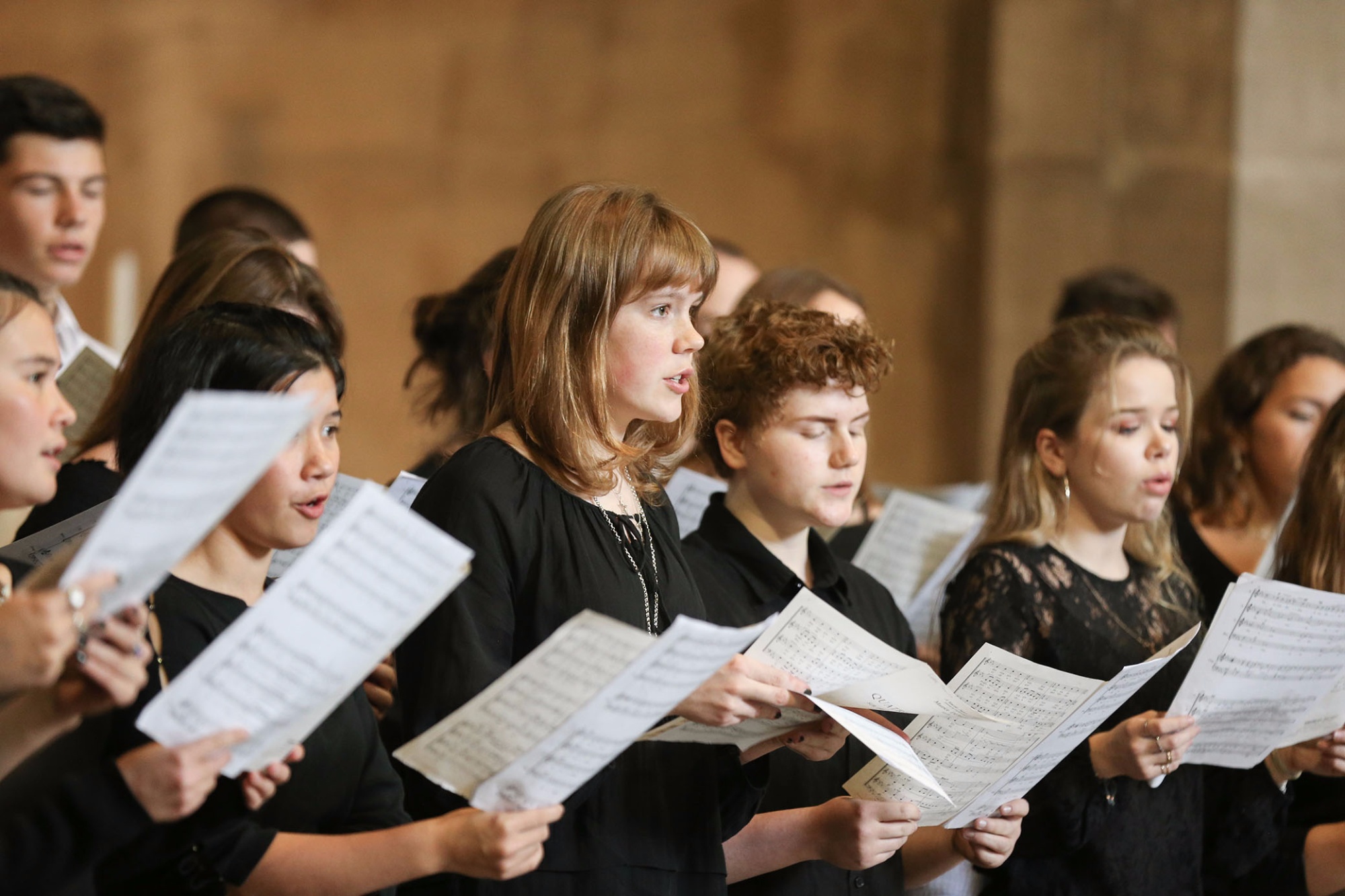 The Concert Band played a majestic piece called Mount Everest opening the second half with imagery pouring out from the music of ice-capped mountains, followed by a joyful and somewhat lighter rendition of Pixar Movie Magic. The audience were clearly competitive as to who would be first amongst their party to identify each film theme. The Chamber Choir completely changed the tone following on with the soulful Tantum ergo by Duruflé; no easy task after the energy of the Concert Band, but they, under the direction of Graham Scott, drew us all in with their stillness. Isobel White’s Amaris Choir were angelic and the clever Ed Sheeran arrangement in particular suited their voices. 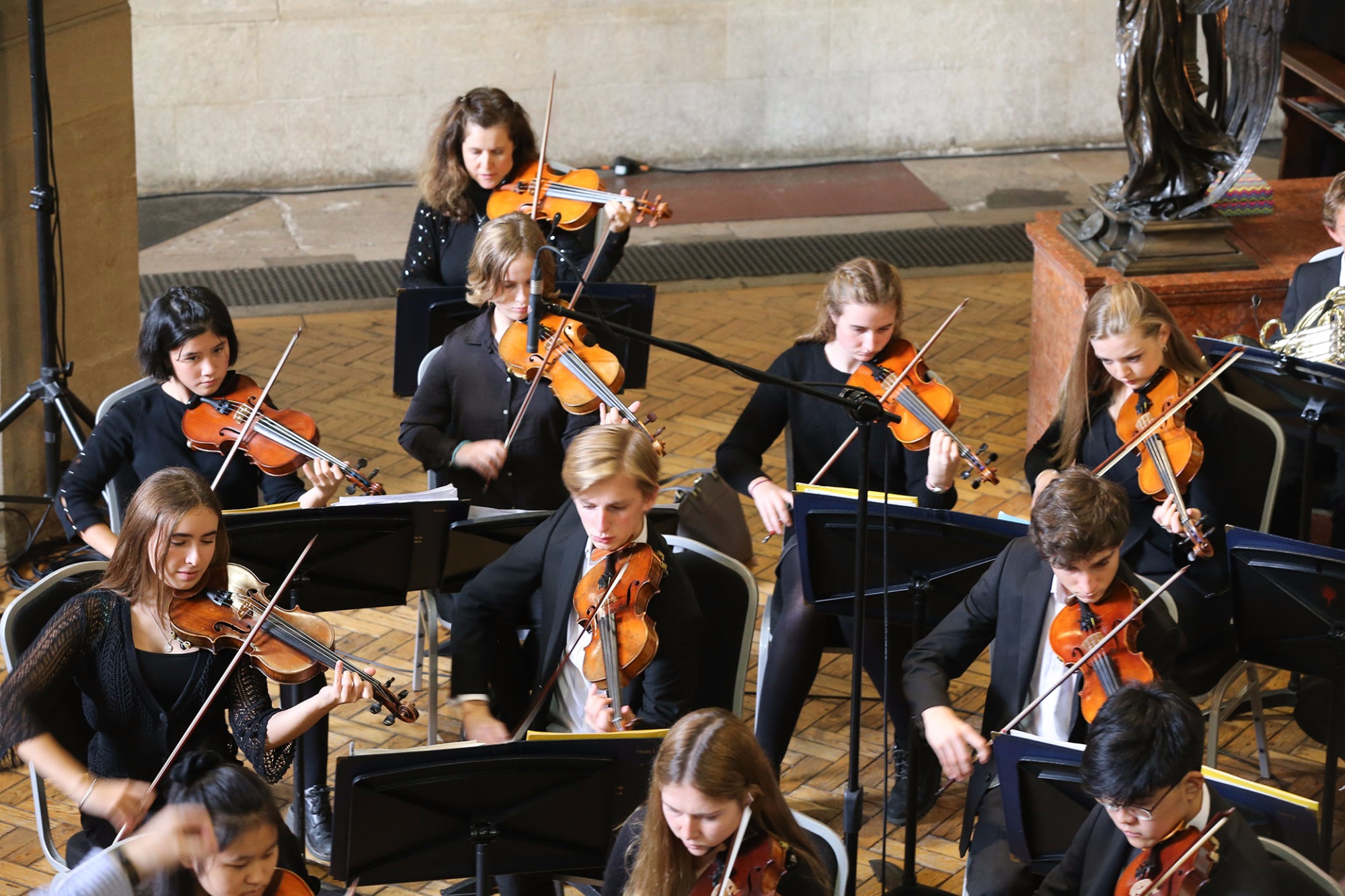 The Allegri Choir quickly took centre stage under the direction of Duncan Emerson, making use of the steps and sang a modern piece called O salutaris hostia, again arranged for the occasion by the Director of Music. The slow sustain from an eight-part choir below two solo sopranos (Sumei and May) was stunning and the Cathedral-style acoustic was perfect for this performance. Parry’s I was glad is a personal favourite of mine, so I was delighted to see it on the programme at all; its strength and salutation serving only to heighten the poignant realisation that this was Duncan Emerson’s last London Concert. Of all the moments of London Concerts that I have enjoyed over the years, it is perhaps watching Duncan’s guiding of soloists, orchestras and choirs as to how to perform in large, new and important venues, and how to enjoy it. Duncan, you have so generously given the pupils of Bryanston an education about performance that cannot be quantified and is priceless – you will be so missed.

I am in awe of the energy that all the music staff team find in the rehearsal weeks and on the performance day itself, and I hope that they know how very much we appreciate them.  Thank you doesn't even begin to cover it.

Duncan has expressed his heartfelt thanks to all who generously donated towards the Max Imhoff Foundation. It raised a record breaking £2040.29, which is a fantastic figure. Max's wife, Helen, is thrilled and has said it will make a very real difference to students in Tanzania.

You can see photos from the concert here.