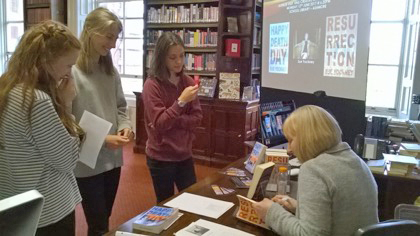 Pupils had the opportunity to hear about Sue's creative writing experiences which began when she joined a creative writing group in the 1990s. Sue wrote short stories and murder mysteries before deciding to write a novel. In 2013 Sue published her first novel for teenagers and young adults, Happy Death Day, a dystopian romance which is a compelling read. The second novel in the trilogy is called Resurrection.

Sue gave budding writers some useful hints and tips including; never throw away anything you write down, keep a notebook with you at all times to jot down ideas, read widely and get to know a variety of genres.

Pupils engaged with the writing process after initial reactions to a visual image and questions. They produced original plots and characters that demonstrated a real flair for creative writing. Sue was impressed by the talented young writers and their original ideas. We really enjoyed this event and pupils were given the opportunity to get a book signed if they wished.
Mrs Minter – School Librarian