Tom Stoppard’s Arcadia, an enduring artefact of modern British drama, enjoyed a remarkable run here at Bryanston at the end of June. 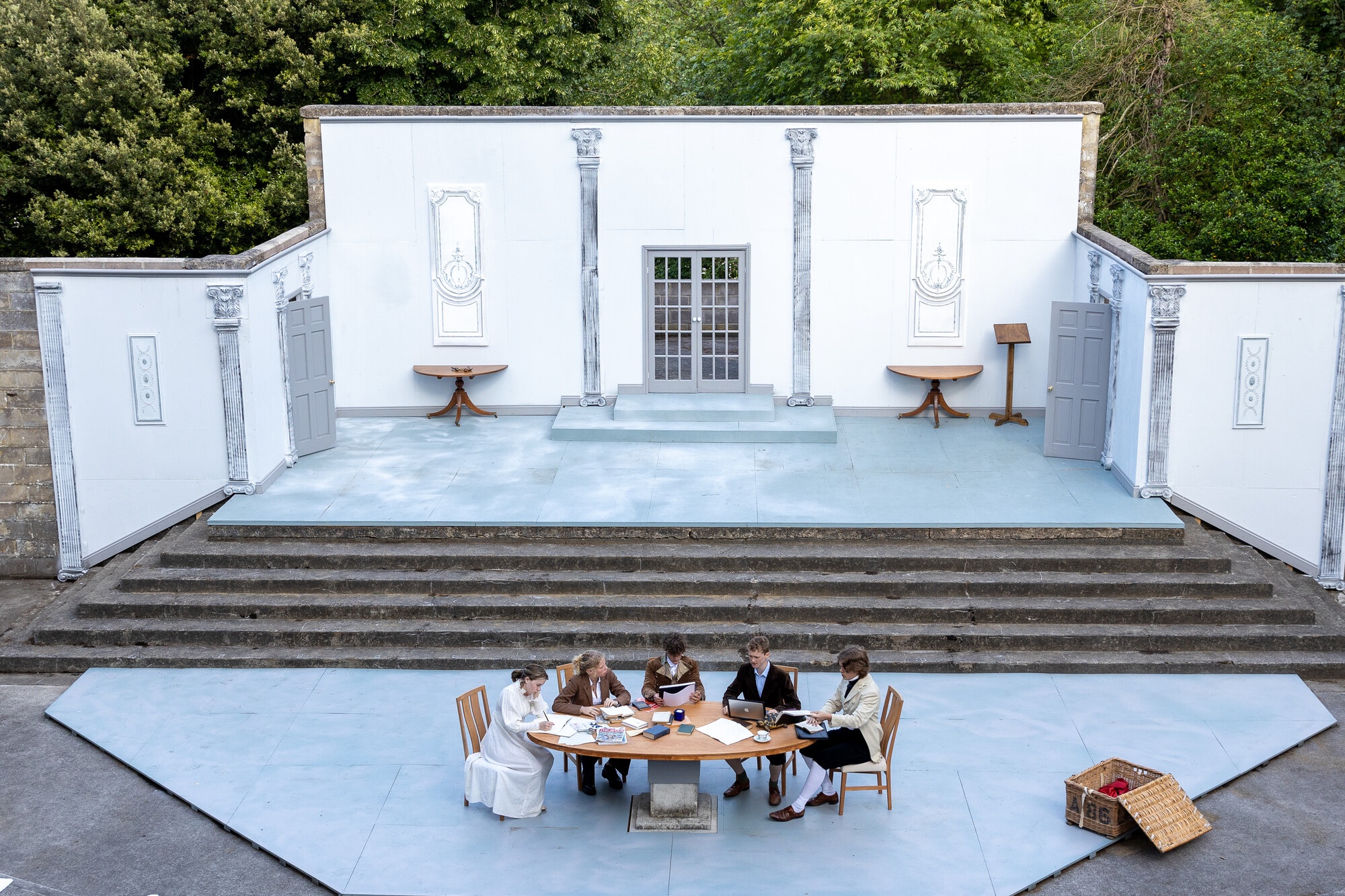 The production was staged at our Greek Theatre, although regrettably was forced to shift indoors to the illustrious Cowley Library after opening night, thanks to inclement weather.

However, this unexpected relocation did nothing to diminish the power of Stoppard’s masterpiece, nor to quell the potency of our stunning cast and crew. Proudly difficult to decode, and even more difficult to describe, Stoppard’s plot is the kind best summarised by its themes: love, death, algebra, time, disorder, decay — the need to know, and those human hearts that are unknowable.

Our production swirled with feeling and intelligence; a sharp, witty performance by an inspired Josie L as the young Thomasina, tempered by real feeling and pathos. “If you do not teach me the true meaning of things, who will?” she asked, plaintively, after learning the true meaning of ‘carnal embrace’. Her tutor, Septimus — a resplendent Theo B — has other things, and women, on his mind. His slow, reluctant acceptance that Thomasina is a genius cast a dramatic emotional core so strong, deep, and profound, that to watch was to admire, and to understand was to weep.

The 19th century half of the cast were supported throughout by a host of talent — Timur S gave a cold, superior turn as ‘butler gone bad’, and Sylvester M’s roared invective was nearly drowned out night after night by laughter and delight (ably supported by the treacherous Captain Brice, in a bright, bold debut by Archie B). Humphrey O’ R was also notably entertaining as nosy architect Richard Noakes, engaged in building a hermitage for a rather unimpressed Lady Croom (the supercilious, sophisticated Greta A). Of course, one of the most enduring qualities of Arcadia is its reliance on the ensemble; a cast so consistent, engaged, and involved is defined most of all by its unity, rather than by any one stand out element, and rightly this is the impression emphasised by Jane Quan’s inspired direction.

The modern half of the action played out in a classic satiric mould, led by Esme T’s frosty Hannah Jarvis, and Aaron P-S’s extravagant, joyfully dislikable Bernard Nightingale. Yet, beneath a succession of comic, loveable performances, something darker lurks, teased out brilliantly by Quan’s gentle ripples of truth and empathy; “You’ve been deeply wounded in the past, haven’t you, Hannah?” asked Freya T’s Chloe Coverly, with an almost absurd accent of significance — but even played for laughs, the repressed, British reality of Stoppard’s 20th century crew lays heavy, and curdles as the comedy fades and the fire rises. A sublime physical performance by the silent Gus (Joey G) proved crucial in the heartbreaking finale; meanwhile Bobbo P’s Valentine — a direct descendant of Thomasina, and Sidley Park’s latest owner — wrangled endlessly with his predecessors’ arithmetic. Asked whether Thomasina could possibly have understood what she’d discovered, his response was wrenchingly exact: “She would have been famous”.

Naturally, there were a few brief moments when chaos theory takes hold: occasional prompting was warranted, and portions of scenes were sometimes missed. Yet, thanks in part to Stoppard, and certainly thanks to Quan, these blips only served to enhance the believability and naturalism of the moment. It was actually surprising to see how very few difficulties there were, considering the complexity of the script, and the 160-minute runtime. Even with minor hiccups, the production’s general coherence cannot be overstated, and though the final revelations seem to invite a more explicit exhibition, the blink-and-you’ll-miss-it subtlety is Stoppard’s formulation, rather than Bryanston’s.

As the action returns to the Sidley Park’s shrouded 19th century world of aristocrats, algebra, and human needs, Bella H’s arrival as an older Thomasina heralds a tonal shift; the audience becomes gradually aware that we are witnessing the final hours before her death, and that her inference of the eventual heat death of our universe — like the Great Library of Alexandria — is destined to be lost to the fire.

Quan’s inspired solution to ending the play visually on a stage without a falling curtain must be seen to be believed; suffice it to say that fireworks have never been so moving, and that the joy of the humble waltz (played live by an ingenious Chris Thomas, with original music) will forever remain crippled by the unbearable groundswell of emotion that Stoppard’s final scene sets alight. Computer grouse? Good English algebra? Give me a good English love story, every time. Like Thomasina, of course, Stoppard’s audience departs in dance — a dance replete with joy, but tempered by impossible hope, and knowledge of an inevitable future. If only, by mapping every atom, they might have known.

Please click here to browse our full gallery of images from the dress rehearsal.