In October, four enthusiastic Bryanston pupils, under the guidance of Andy Barnes and Hannah Southby, formed a group with the aim of developing and coding a fully functional app for use by new pupils arriving in D (Year 9). 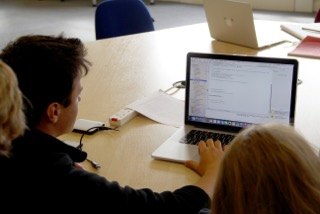 The group is led by our B IT scholar, Molly, and brings together pupils with an interest in app development, both from a computer programming perspective and also those with more of an eye for the design aspect.

The group gives mutual support to members so they can develop their coding skills and also have exposure to the commercial aspects of creating an app. With the support of the Finance Bursar, Stuart Jack, the group will register as app developers and submit their app to Apple’s App Store ahead of the new intake of pupils in September 2015.

The group was created after selected Bryanston pupils took part in a Digital Genius presentation afternoon run by John Parvin from Solutions Inc. The idea behind Digital Genius is to encourage pupils to steer and help support the use of technology at their school.

The app is designed to introduce new pupils to life at Bryanston. Using the experience of current D pupils, and also those who have been here a bit longer, the group formed an outline for the app, which will include information about everything from ‘Where is my boarding house?’ to ‘What time is lunch?’  It is hoped that having access to this information in an easy-to-use and portable app will make the process of settling in at Bryanston even easier.