Bryanston Dance Show 2015 was another energetic explosion of lights, cameras and action! 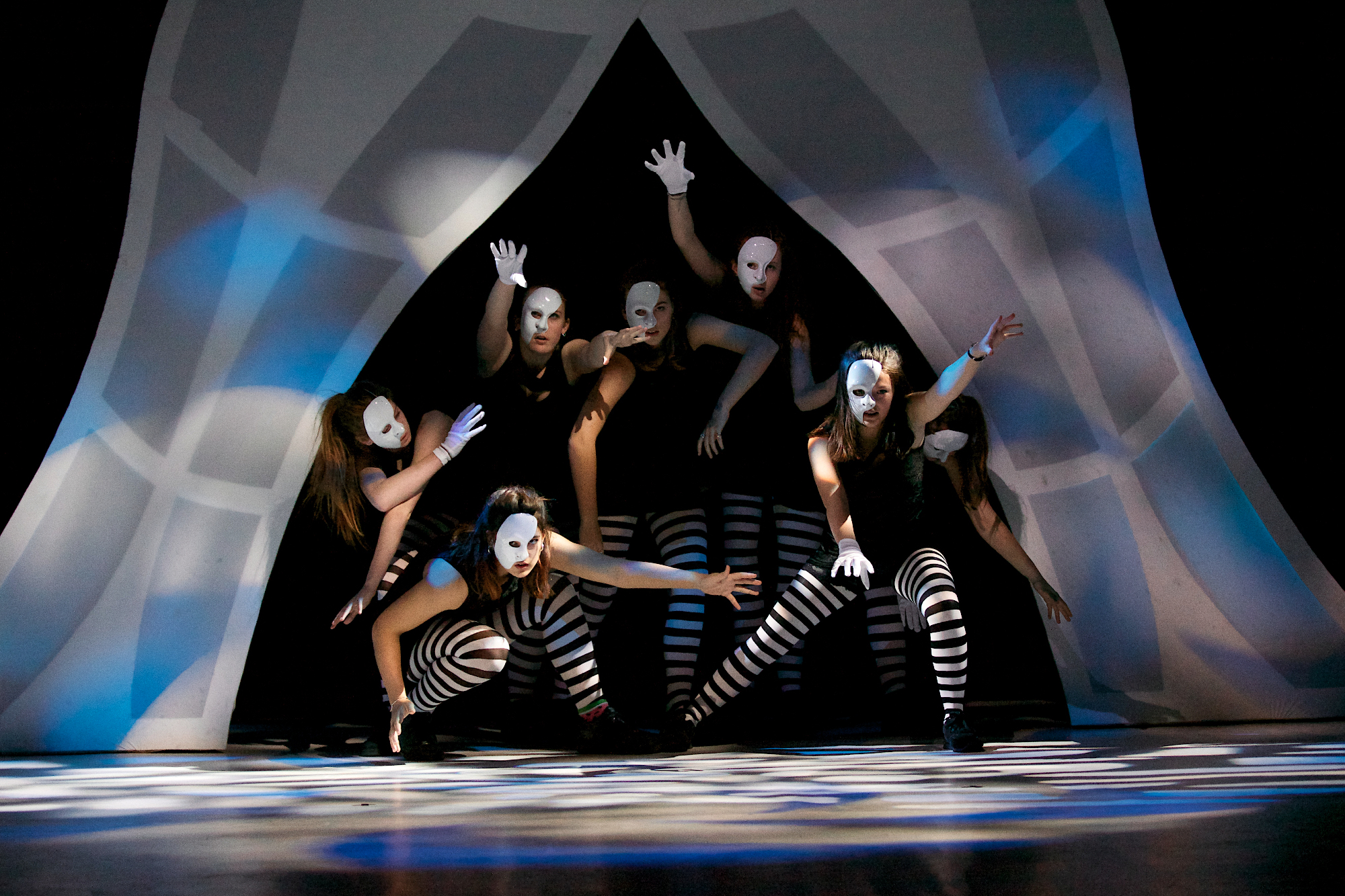 Bryanston Dance Show 2015 was another energetic explosion of lights, cameras and action, characterised by a surge of interest in contemporary dance (three separate groups) and a higher focus on ballet, with a beautiful interpretation of the development of ballet through time, inspired by Mussorgsky’s Pictures at an Exhibition, which established key periods of Classical Greece, Courtly dance, Romantic and Classical periods, the Modernist movement of the early twentieth century and a Marilyn Monroe number on point. Two excellent D dancers linked each period together as they browsed through the gallery. Imaginative choreographer and teacher Janet Knight and the production designers were able to reflect these chronological developments with projected artistic works from the period on a circular screen at the back. An atmospheric trio dancing to the haunting film music of Titanic, choreographed by Paris Notley, added a further dimension and glamour later in the programme.

Choreographic development for this show had clearly been a labour of love for Hayley Baker, who prepared the majority of the street dance numbers before going on maternity in the Christmas holidays. As she was teaching seven street dance groups and one contemporary group this was no mean feat and the show’s success is most definitely a compliment to her forward planning, creativity and commitment to Bryanston pupils. They too, as always, took responsibility for polishing and improving their work, with occasional extra rehearsals. We were doubly lucky to have a new contemporary and street dance teacher on the team too, who was able to cover Hayley’s maternity, pick up on the end of her choreography and add these groups to her existing three. Bryony Holder has proved to be a superb addition to an already strong team, coming to us with a degree in contemporary dance from Chichester University and a passion for teaching dance. Her ability to pick up additional classes so quickly, whilst developing her own groups was notable and had an equally large impact on the success of the show this year. Her contemporary choreography added a new flavour and breadth to the show, which greatly added to its diversity.

The organisers this year were seven A3 pupils Tuesday Dolan, Isabelle Duggan, Caia Fallowfield, Iona Mackay, Natalie McNulty, Willa Petty and Freya Thorpe. They were quietly efficient in many ways, producing the programme, posters, filming dance across the school grounds for a promotional film, organising costumes with the teachers and producing the finale. Each one contributed to the overall achievement, calmly but with real engagement and care for the show. There was a lovely atmosphere backstage amongst the 80 strong cast, also including for the first time a cheer leading group run and choreographed by PE teacher Madelene Vaughan-Johncey, who had printed Bryanston logo tops and pom-poms to create Bryanston’s first cheerleading team of D pupils, whose lifts were particularly high and impressive!

The only thing lacking this year was slightly less pupil–choreographed work, though Jenni Turrill (A2) and Isabelle Evans (D) performed a stunning duet of their own work – the technique and unified style were superb, demonstrating the quality of work to be seen from our best dancers. In future, more pupil choreography will be on the way I hope. And more boys! Elisei Sergevnin was the sole male representative this year, though several boys tell me they are keen to take dance lessons in disciplines as varied as breakdance and ballroom – both of which can be organised. Please see me!

The organisers gave a heartfelt and lovely thank you to all their teachers on the final night of the show, asking them up on stage to give flowers and cards – all their own work and a measure of the thoughtfulness of these girls, who also featured the A2s in the finale. They also gave public congratulations to Hayley and James Baker and baby daughter Lily - even though prima donna Lily sadly prevented Hayley’s attendance on the night. They were also quick to thank the hardworking team of staff and crew who always make the dance show such a visual and aural feast with minimal input from directors and choreographers. The striking projection screen and legs allowed for a variety or strong colour and moving projection to add variety to each piece, with moving lasers and side lighting adding real definition and further animation to the movement. Stuart Myles and team of Jezz Davies, Nick Daubney and Tim Pennells had developed strong aural and visual support with the stage crew, who put in voluntary hours as per usual to make this a thoroughly professional event.

This event was of course the final Bryanston Dance Show for the A2 dancers, who were able to reflect on five years of participation in some cases. Jenni Turill, in particular, who has aspirations to teach dance in the future, has been a stalwart, choreographing her own numbers from C onwards. Bella Cary has likewise been involved in dance throughout her time here, focusing on street, contemporary and musical theatre, and Juliette Edward and Louana Erard arrived in the sixth form and immediately threw themselves into every dance form on offer, from tap dance to ballet. Olivia Macmillan Scott, another arrival in the sixth form has pursued her ballet through to Grade 7 and Jessica Beaumont has made her effervescent presence felt in modern jazz and street numbers, keen to try a variety of styles since her arrival in A3. The A2s who were the dance show organisers from 2014 (pictured above) are surely honorary members of the unofficial ‘Dance Department.’ An emotional finale for them, but a big thank you from the rest of us for all their efforts.