STEM: anything is possible

To kick off National Science and Engineering Week (9-18 March) we welcomed Dr Nicola Hoyle to the school last Friday as part of our Science Society Talks. The subject of Nicola’s talk was: STEM - anything is possible.

Nicola spoke about science in the real world and that how event CGI movies needed to have an element of reality to be accepted by moviegoers. As such, she stated that CGI programmers will watch animals’ behaviour before trying to replicate this on the screen (inverse kinematics). She also discussed the varied range of careers within engineering - from BT engineers who fix cabling issues to engineers who decide to shoot movie explosions under water, summing up that engineering is all about solving problems. However, she did say that lots of CGI programmers are American, hence the drive to encourage more UK students into STEM subjects (science, technology, engineering and maths).

She also got our pupils involved in discussing what things might need fixing by future generations, such as climate change, pollution and overfishing. They also completed a task where they had to decide what items to grab from a sinking yacht in the middle of the ocean.

Nicola ended her talk by encouraging pupils to do what they enjoy and always ask how and why.

Nicola studied maths at Oxford University aged 16 and subsequently completed a PhD at Southampton University before working for the Williams Formula 1 team. She then led a team at Double Negative, a visual effects company, which won an Oscar and BAFTA for their computer graphics on the film, Inception. 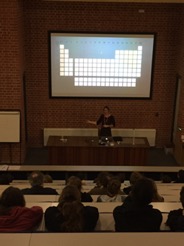