The first Science Society lecture of the term was an exciting look at sound and included a musical performance from the presenter, Dr Lewney. Read the report from our Head of Science, Dr Kearney, below. 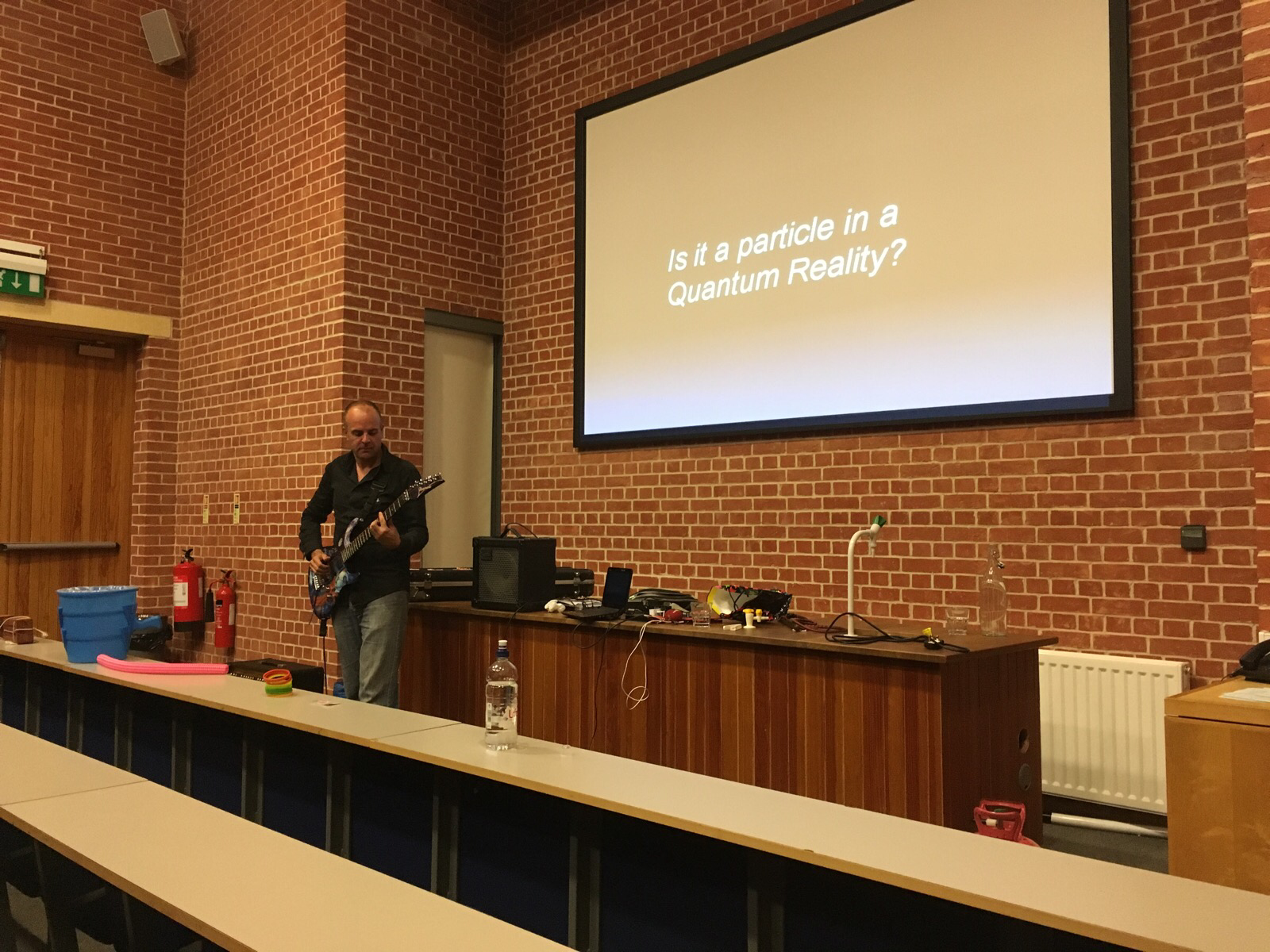 After taking requests and entertaining the gathering crowd with guitar solos from Dire Straits, Led Zeppelin and Metallica amongst others, Dr Lewney, a physicist and patent officer from Cardiff kicked off his talk with an introduction to the physics of sound. A pulse from air flicking up the hair of audience members is not sound, sound is a continuous wave, the frequency of which and the pitch of which is affected by the size of the vibrating objects causing the sound. Understanding waves means you can understand sound, music and a great deal more, possibly everything!

A string on a guitar vibrates but a string playing a note has a range of frequencies or harmonics that give the note its quality or timbre.  A wah wah pedal can filter out some of those frequencies or allow more through to change the sound of the note being played.  A string alone moves very little air and makes a very quite sound.  An acoustic guitar has an open box which vibrates, amplifying the sound.  Holographic photographs of a guitar show the vibrations moving in the structure of a guitar.  In an electric guitar the vibrating strings are metal and their movement near a coil wrapped round a magnet causes an electric current to move in the coil. That current is boosted by an amplifier but the wave that is converted to a current can get distorted if you exceed the limits of the amplifier. New frequencies and harmonics add depth and power to the sound and the rock guitar sound is born.

Adding waves together can be analysed by Fourier analysis and understanding the maths of that can lead to many discoveries.  Perhaps the biggest of these is string theory.  The theory states that all particles in the universe are vibrations of tiny strings, so tiny that the ratio of a string to the size of an atom is similar to the ratio between a guitar string and the entire universe. But the theory has no secure evidence to support it.  Only a few people in the world understand it.  But it is an interesting idea worth exploring.

The theory proposes that every particle is created from different harmonics of tiny strings. That includes all quarks, electrons, photons etc. They are so tiny they appear to us as points. But the strings exist and vibrate in more than the 3 dimensions of our universe.  Understanding the meaning of additional dimensions is difficult. Imagine ants living on a 2D sheet of paper. They are puzzled by a 3D sphere falling through their world.  Their observation is a point appeared in their world, spread out as a circle and then shrank again. With no concept of a 3rd dimension they would struggle to understand what happened.  We live in a 3D world.  If we saw a sphere appear, grow and then shrink, it could be because a 4D sphere just fell through our 3D world. However, string theory says the extra dimensions could be rolled up and very small within our 3 dimensions.  We could consider time as an additional dimension. String theory works in 11 dimensions, the 3 we know, plus time, plus 7 rolled up ones.

Scientists always acknowledge that they could be wrong and look for evidence to support or disprove their theories. Tests need to be done and the collisions of high speed protons at CERN is perhaps the ultimate example. At CERN the quest is to understand the nature of matter.  Atoms are made up of smaller particles, protons, neutrons and electrons.  But you quickly spot problems such as why electrons do not collapse onto a nucleus because opposite charges attract and why protons don't repel each other to explode a nucleus. The answers lie in finding new forces and the weirdness of quantum physics.  But fundamentally a bigger question is why are objects hard to move and accelerate. The answer is they have mass, specifically what we call inertial mass. But what is mass? Physics suggests there is a Higgs field that permeates all of the universe and objects resist movement through that field. As part of that resistance there is an exchange of Higgs particles between masses. The LHC at CERN set about finding the Higgs particle and after a few years and an astonishing amount of data collected it was found. Perhaps the currently unproven string theory can also be tested in the future as our experimental capabilities improve.

Dr Lewney took questions from the audience before his encore, which was a tribute to quantum mechanics with a rewording of Bohemian Rhapsody.