On Friday 28 April, Bryanston Science Society welcomed Bob Dewar to discuss climate change. Below you can read the report by our Head of Science, Dr Mike Kearney. 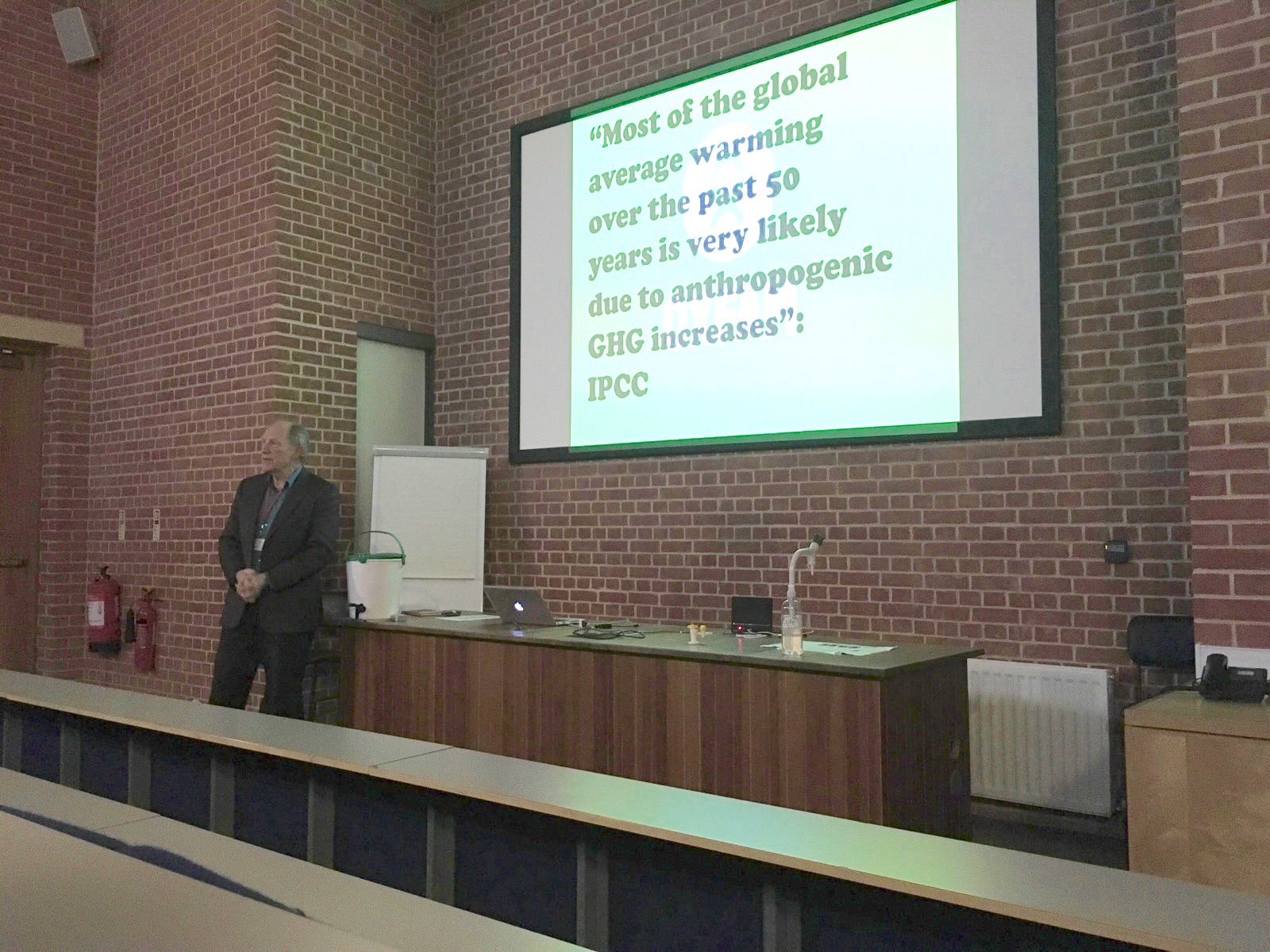 Bob Dewar is a former British career diplomat with over 30 years experience in sub-Saharan Africa. One key aim throughout his life has been to try to bring positive policy and behavioural change, leading to better governance and rights and quality of life for people at the grass roots through community-based solutions. He campaigned for high standards of corporate, social and environmental responsibility. He believes in a ‘joined-up’ systemic approach to policy and organisational structure, integrating development, environmental and climate change considerations from the outset, promoting development issues through partnership and dialogue. Since retiring he has become the Oxfam representative for Dorset.

Bob sees the issue of climate change as critical and believes the young scientists in the audience tonight must not only understand the science, but also support the joined-up thinking and sensible policies needed to deal with the problem globally. Bob is representing Oxfam, which wants to develop a fairer and more sustainable world. The most vulnerable people who will likely be most affected by climate change, are usually the least responsible for it. Climate change makes their difficult lives all the more challenging. Consider Lake Chad, surrounded by nine million refugees, many fleeing from Boko Haram, which is shrinking dramatically and reducing the availability of water in an arid land.

Oxfam has a desire to end poverty, which includes developing respect and jobs, not just money. They seek to provide water where it is scarce. They look to develop equality for women and especially to allow girls to be educated. They look at projects to develop work and employment. Within that, they try to consider climate change. They want to always think 'climate smart'.

We are all connected as a global community. Consider the growing of flowers in East Africa. It provides employment and economic development in areas that need support. However, the transport of fresh flowers to Europe has a large carbon footprint with many flights to rush flowers around the world.

There is an almost complete scientific consensus that the atmosphere is warming due to the rise in the quantities of greenhouse gases. We are responsible for the change and so governments must take action to slow and reverse the changes.

In talking with governments in developing countries about how they should consider climate change, they often reply that it is the fault and responsibility of the already developed nations. The Paris Climate Change Conference stated a desire to keep temperature increases down to 2 degrees celsius. Some countries wanted to push for 1.5 degrees, because any more than that and their island nations may disappear altogether under rising sea levels.

Some of the more direct impact of climate change on vulnerable people includes drought, largely responsible for the famine currently affecting East Africa. The reverse is the case in Bangladesh or Nigeria, where increased rain causes flooding, destroying crops and houses. Temperature changes can restrict the growth of major cash crops like cacao or disrupt fishing. Food supplies could decrease by more than 10% globally, while the population continues to rise.

Solutions involve some difficult decisions about how we source our energy, reducing our dependency on carbon fuels. Sometimes solutions can come from adaptation, i.e. using rafts to grow crops on flooded land. Fifteen percent of global emissions comes from cattle being farmed for meat. Changing attitudes to eating red meat may be a problem in the West, but is all the more difficult in poorer countries, where cattle may effectively be the life savings of individuals. Political will and policy change can make a difference, including making solar cells available cheaply in developing areas. How do we implement the sustainable development goals? It is described as a three legged stool. Environmental issues are a crucial leg of the stool, alongside economics and social issues. Considerations must be long term, thinking across future generations, not just short term fixes.