On Friday 22 April we welcomed Dr Morse, a research fellow and the project officer at the Department of Physical Sciences of the Open University, to Bryanston's Science Scociety. Dr Morse gave a captivating tallk on the Rosetta probe, as well as his earlier projects, including the Beagle mission to Mars. You can read a report of Dr Morse's presentation by Mike Kearney, Head of Science at Bryanston below. 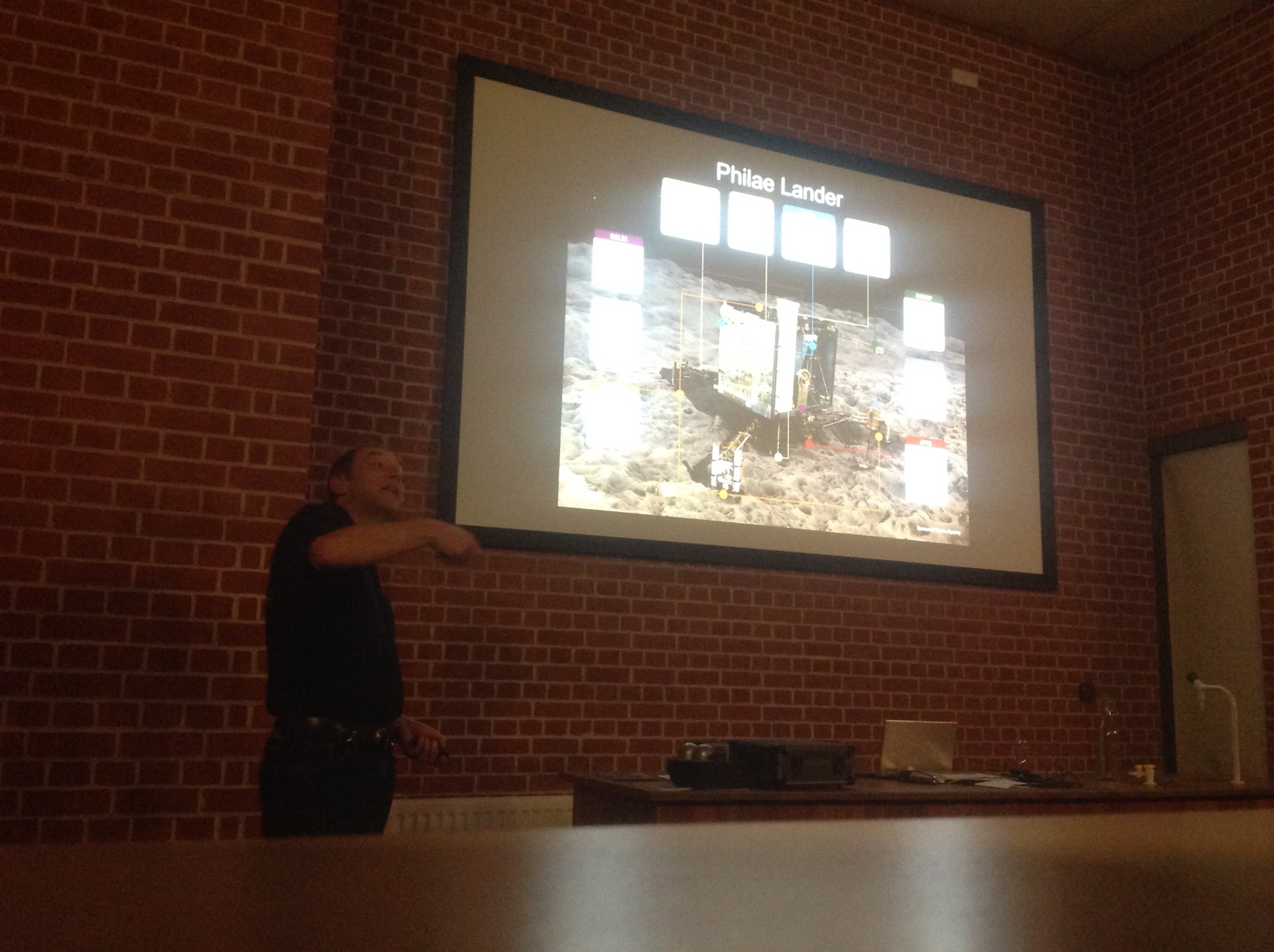 Dr Morse has been with the OU for over 25 years. His publications include many about the instruments used on the Rosetta probe that we heard about in his presentation, but also earlier projects including the Beagle mission to Mars. As a member of the planetary sciences research institute he worked with the late Colin Pillinger on three space projects. The Beagle 2 mission to Mars famously failed, but recent evidence shows how close they came to a safe landing. Cassini-Huygens landed on the moon Titan and recently Rosetta orbited and landed on a comet.

The solar system formed five billion years ago and the evidence of the raw ingredients that formed the solar system can still be found in asteroids, meteorites and comets. Comets come from the outer solar system following highly elliptical orbits, passing close to the Sun and a long tail of evaporating gas and dust famously forms in the solar wind. Analysis of the make up of comets has previously relied on analysing the tail material and not the comet itself.

Having sent the probe Giotto to rendezvous with Halley's comet, the next plan was to send a mission to orbit a comet and land on it. That is the Rosetta mission, named after the Rosetta Stone which enabled historians to translate between languages.  The mission was to use three methods to study the comet. Amateur astronomers provide data to add to the findings of the orbiting Rosetta satellite and, finally, the Philae lander measured conditions on the comet's surface. The Philae obelisk (now at Kingston Lacy near Bryanston) was also a text of different languages and the naming of the lander kept a lot of the international contributors to the mission happy!

Studying the components of an unknown material usually means using a mass spectrometer that could be a table top device or fill a small room.  Heating a material until it vaporises and passing the atoms through a magnetic field enables the identification of individual elements and isotopes.  The trick was to build such a machine that could be shrunk down to a size not much bigger than a shoebox and be as light as possible (around 4kg).

A sample had to be collected on landing. An Italian-designed drill was designed to cut 30 cm into the comet.  The sample is delivered into an oven which is less than  1mm across.  Several such ovens were available to heat the samples to different temperatures.  The surface of a comet was mysterious enough that the design specification had to allow for landing and testing material as soft as candy floss or as hard as concrete.  Material could also be collected from the very thin atmosphere round a comet and analysed in the mass spectrometer.

Getting power to the space craft required huge solar panels because it was travelling so far from the Sun.  A 32m wingspan enabled power of 8700W near the Earth but only 920W at aphelion.  The lander was covered in solar panels, but they would only generate 10W and the batteries would only last a short period of time once the landing was complete.

Rosetta was launched on an Ariane rocket on 2 March 2004.  The journey to the comet then took 10 years.  The track took it past Earth three times and Mars once, using the gravity of the planets to accelerate and widen the orbit.  It spent over two years out near Jupiter and the probe was shut down as it didn't have enough power.  When it was woken, adjustments were made to catch up with, and then orbit the comet.  Rosetta has now been close to the comet for over a year, a unique mission and extended longer than was anticipated as the probe is doing so well.

Deciding how to land on the comet could only be done once close enough to take photographs of its shape.  Eleven different teams would have to agree on a landing site that would suit all of the different instruments on the lander.  They sought a location that was flat, smooth and in sunlight but interesting scientifically.  Three months before landing the shape of the comet became clear and it was complicated and rotating rapidly.  The teams quickly identified the shape as being rather like a rubber duck as it enabled easy comparison of locations in discussion.

The surface proved to be much more complicated than expected, with many craters formed as caves within the comet have collapsed with each trip near the Sun.  The chance of landing successfully decreased significantly and the engineering teams realised there was probably no good spot anywhere. The chosen site was as smooth and flat as possible and the target area was around 1km across on the head of the duck, behind the right eye!

Once the lander touched down it had to be held there; it was designed to fire two harpoons and use three ice screws to dig into the frozen surface.  The lander took seven hours to fall from the main spacecraft to get to the surface of the comet.  It was seen to be on course after a couple of hours.  Once it was down it was important for the instrumentation teams to take measurements as quickly as possible, sharing the power and the time available to the nearest second.  Over two or three days the atmosphere would be tested and drilling take place.  The battery would then be drained and the probe would sleep for weeks to charge up the batteries.

There was much public excitement when the landing happened, but the team were quickly aware that something had gone wrong. However, data was still being gathered even though we now know that the lander had bounced and was tumbling through space before falling again.  Dr Morse's instrument recorded data as it 'sniffed' the atmosphere.  It identified a lot of expected compounds, but also showed a significant number of organic molecules not expected.  This was almost certainly surface dust kicked up when the lander bounced, a bonus measurement.

Toluene was found and nitrobenzene, which surprised the team.  Long chain carbon molecules were found.  These molecules were found on the comet today, but the processes that formed them would have occurred in the earliest times of the solar system.  The molecules are possible building blocks for organic material which is a significant discovery.

After bouncing, the lander ended up in a hole which could not be identified on the comet. The lander was able to function but it could only do so and keep in contact with the main spacecraft for a few hours at a time.  Measurements of the gas around the lander were taken regularly.  Levels of carbon monoxide and dioxide suggested that the comet could be two smaller ones fused together with slightly different chemical signatures.

The carefully planned testing had to be changed, but eventually they decided they could drill one sample and deliver it to one of two instruments.  It was sent to a German instrument that was able to test for amino acids.  But the British team were given the reward of some of the last power from the battery to do one last experiment.

As the comet neared the Sun it became much more active, emitting jets of gas and dust.  The spacecraft had to be moved further away from the comet to keep safe.  Boulders the size of houses were also ejected.  The results showed the comet had a dry dust layer covering a hard water ice layer.

Key results included the varied terrain and a ratio of hydrogen isotopes in the water content that proved that comets like this were not the source of Earth's water.  Molecular oxygen was found, which does not fit the expected patterns of the early solar system.  Lots of organics were found on the surface and we now know the surface is both very soft and very hard.   A challenge for any future missions.

Plans are now being developed to extend the mission and even land Rosetta softly on the surface.  The lander has woken up again but is struggling to operate after spending time at -160 degrees centigrade.