On Friday 4 March Bryanston's Science Society welcomed Dr Simon Boxall to give a fascinating talk on oceanography, climate change and art. Dr Boxall is a lecturer with the Ocean and Earth Science, National Oceanography Centre Southampton at the University of Southampton and you can read a report of the presentation by our Head of Science, Mike Kearney below. 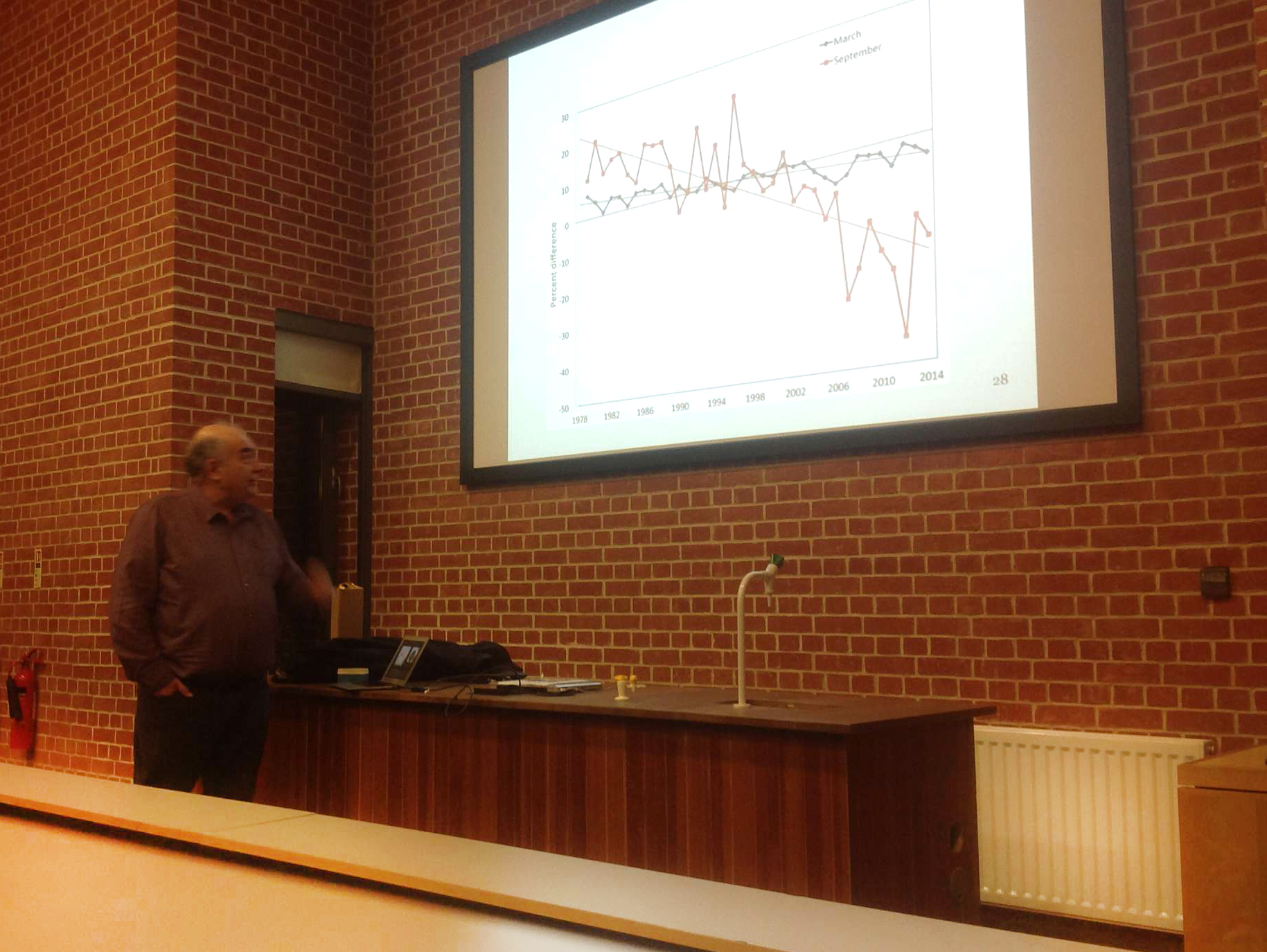 What is oceanography? It is science, but there are no lab coats to be worn and the work takes Dr Simon Boxall all over the world, possibly sitting on tropical beaches (but working) and in seas in all weathers. The oceans are vast. Every person on the planet could have their own 2m deep swimming pool with an area of 93 square km. The average depth of the oceans is 4 km and, in places, down as far as 11km. Electromagnetic radiation does not penetrate the ocean very far, so it is difficult to probe, relying on acoustics and sonar. Very few people have visited the deepest ocean depths and submarines that visit such depths are very expensive and have a short life span. Southampton University has a remotely controlled submarine. Discoveries include exploring bioluminescent creatures generating their own light where sunlight will never penetrate. Some creatures look alien, or is that because movie designers have experience in oceanography? They also explore the volcanic zones of mid-oceanic ridges, which have their own very different ecological systems, with bacteria at the bottom of the food chain.  Energy from hot plumes is enough to support a huge range of species. A new deep ocean species is discovered, on average, once a day. Much of the business of oceanography is about sampling the oceans, using research vessels that patrol the oceans at a cost from £50,000 to £200,000 a day to run before any science is done. However, robotic systems are being used that can work independently for a couple of years, feeding back information with several thousand now in operation. All of the data is available to the public internationally, and the cooperation between a huge number of nations is a key part of the work done.

Venice is no longer sinking now that ground water is not being pumped out by local industry. However, Venice is a clear example of sea levels rising, as flooding of the city occurs more often than in the past. Following the inclusion of barriers to hold back the water, analysing the water quality in the lagoon and classifying the vegetation is now quickly done by flying over and recording the colour of the sea. This replaces a process using boats that took months for a full survey.  Dr Simon Boxall was involved in studying some recent major oil spills, again using aircraft analysing the light reflected off the ocean to determine the thickness and quality of the oil. He is also involved in research for electricity generation, like the Swansea barrage and tidal turbines in Scotland. We have large tides in the UK and it is a reliable source (unlike wind) that can be harnessed and, as the times for tides vary around the country, we can always be generating energy.

Why are we concerned about climate change?  Global warming is real and measured, but the effects vary hugely in different parts of the world. The result is more extreme weather, which is becoming more and more common, so warming is only part of the story. At the turn of the century ice cover at the North Pole was predicted to have a 50% reduction across 70 years, but the predicted levels for 2080 have already been reached with the lowest ice cover in history consistently each summer. In 2015 you could almost get to the North Pole in a boat. An ice-free Arctic in the summer could be happening by 2030. Winter ice levels are now also being affected and locals who used to hunt on sea ice in the winter can no longer do so. These changes affect our own climate in the UK. The Gulf Stream and its extension, the North Atlantic Drift, bring warm water to our shores. The sea ice that forms at the poles squeezes out the salt producing salty, dense cold water that sinks, which drives the Gulf Stream. If we lose the ice formation, then it slows the Gulf Stream and, as we are at the same latitude as Alaska, the lack of warm water will cause temperatures in the UK to drop significantly.

Cape Farewell is an arts and science programme looking at the effects of climate change. The brain child of David Buckland, it is intended to bring an artistic approach to communicating the concerns about climate change. Some art has included projecting images onto icebergs, a risky business if you get too close! A mixture of scientists, musicians and artists travel the Arctic Ocean aboard a sailing vessel. The comedian Marcus Brigstocke travelled with them, developing a stand up routine to develop new ways of improving awareness of the problem. Anthony Gormley, Vikram Seth, Jarvis Cocker, Robyn Hitchcock, KT Tunstall and Ian McEwan have been among the other artists travelling with them and using their experiences to inspire writing books and music.

Oceanography enables scientists to come together from a range of skills. Dr Simon Boxall is a physicist, but clearly chemists and biologists are key players in aspects of the subject mentioned above. Marine science graduates can also look forward to a range of employment opportunities with governments and a range of industries. 80% of the remaining resources of minerals are under the sea, so it is increasingly commercially important