On what was the first occasion that alumni from these two long-standing rivals had met, spectators were treated to a hugely entertaining match.

Bryanston did not have a front row, so unfortunately it had to be uncontested scrums from the start. Marlborough put Bryanston under a lot of pressure early, but the tackling was strong. Bryanston looked a little rusty in the early stages and were guilty of spilling ball and probably playing a bit too much from deep. James Allison was unfortunately forced from the field very early on, which was no reward for his brave decision to start in the front row.

With the pacy backs Bryanston had out it was great to see them putting width on it. Justin Lear looked sharp, benefiting from brother Seb at fly-half. Sam Barkham put good pace on the ball from scrum-half and showed that his quick feet had not deserted him Marlborough were a bit more direct though and scored three tries in the first half to a dropped goal from Bryanston. The latter 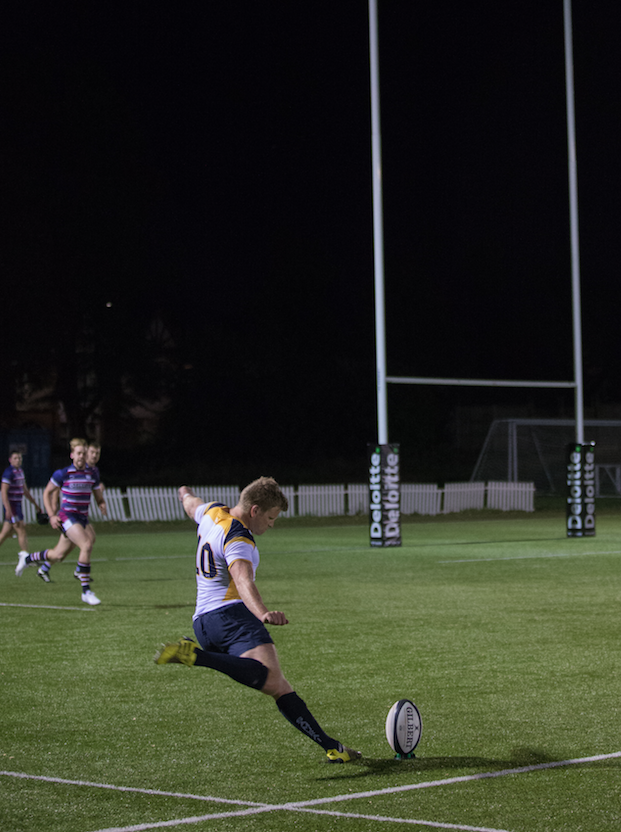 was superbly executed just before half-time by skipper and No. 8, Archie Stead. This gave heart to the side after a slightly disrupted first half where several players left the field with injury. The bench was emptied at half-time and so all 21 players played at least a half.

Old Bryanstonians came alive in the second half and showed great invention from broken fields. Johnny Plimmer began to make great inroads from full back and the support play of the whole side was of the highest order. Ollie Drew carried hard up front and Charlie Dickson and Harry Mortimer gave Archie Stead great support in the back row.  James Showering flew down the wing and Will Vaughan-Edwards took several big hits for the team! Bryanston scored three super tries in the last 20 minutes from Ellliot Boothright, Harry Hosford and the twinkle toes of Chris Nicholas. Seb Lear kicked two conversions  for a final score of 36-22 to the Malones.

It was great to see such a big crowd (estimated at close to 200) that was predominantly Bryanston. A lot of OB rugby players were in attendance on the touchline, leavers from 1984-2018. It is hoped that this game might have whetted their appetite to dust off the boots again.

Do get involved next time, Saturday 27 October versus Old Shiburnians.