Fun on the river!

The inaugural Buffalo Family Regatta on Sunday 3 June 2018 was a great success.

In fact, it was enjoyed by over 170 Buffalo family and friends ranging in age from under 10 to over 80, exceeding the wildest hopes of the organisers by far. Unhindered by doubtful weather, many picnicking families arrived in good time and were seeking shade by the mid-afternoon.

There were over 40 boats, from single sculls through pairs, coxed fours to an eight, all with eager oarsmen, women and youngsters taking to the water. Without the pressure of racing, many a crew made a very tidy fist to their task. The programmed 4pm finish time for water activity always looked doubtful, and only a few left before 6pm.

The aim of the day was to raise awareness of who the Buffaloes are and also to highlight the shift of mission after 40 years of existence. To these ends, many t-shirts were sold along with other merchandise promoting the school and/or the Buffaloes.

The day began with a relaxed 2pm start for guests, allowing time for wandering around, meeting and greeting, and bagging tables and chairs for themselves for the afternoon. Gradually, lists of boats with crew members were posted and so the rowing began and continued unabated for over two hours.

At 4.30pm, with some boats still on the river, a brief speech of thanks from Buffalo Chairman Anthony Thompson and a slightly longer one from Arabella B, current pupil and Girls’ Captain, which included a mention of Bryanston's success at the National School’s Regatta. Buffalo founder and 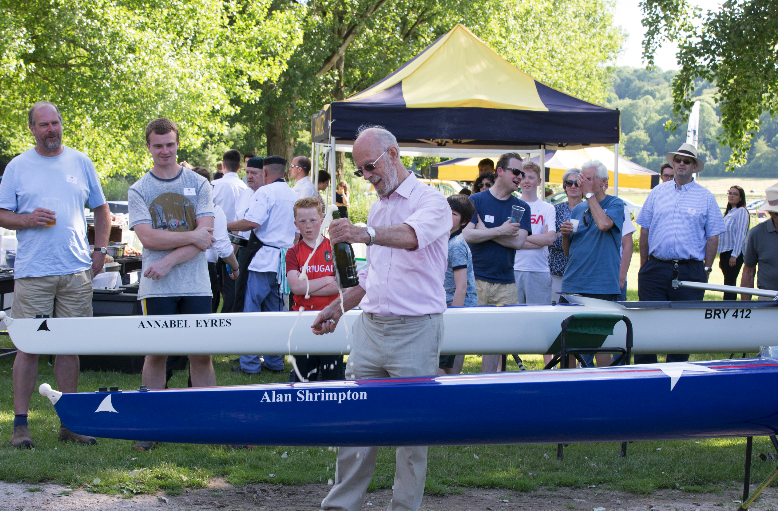 President Alan Shrimpton then ceremoniously christened a quad the fourth ‘Alan Shrimpton’ (the others having been ‘moved on’ for various good reasons). By which time, mouth-watering smells were wafting from the catering team's barbecues, and all were ready to eat. Many thanks to the catering team for an excellent spread. Thanks also to Head of Rowing, who unobtrusively masterminded the team organising the boating, and the alumni team who marshalled the school’s resources for the Buffaloes.

The aim for the Buffaloes now is to increase membership numbers by reinforcing the fact that anyone associated with Bryanston rowing is eligible for membership and enlarging the younger demographic, thus increasing income to swell our rowing bursary fund. Please email Sam Tonks, Alumni Relations Officer for details at alumni@bryanston.co.uk.

You can view photos from the day here.