Dr David Martill discusses what scientists have described as the first known fossil of a four-legged snake. 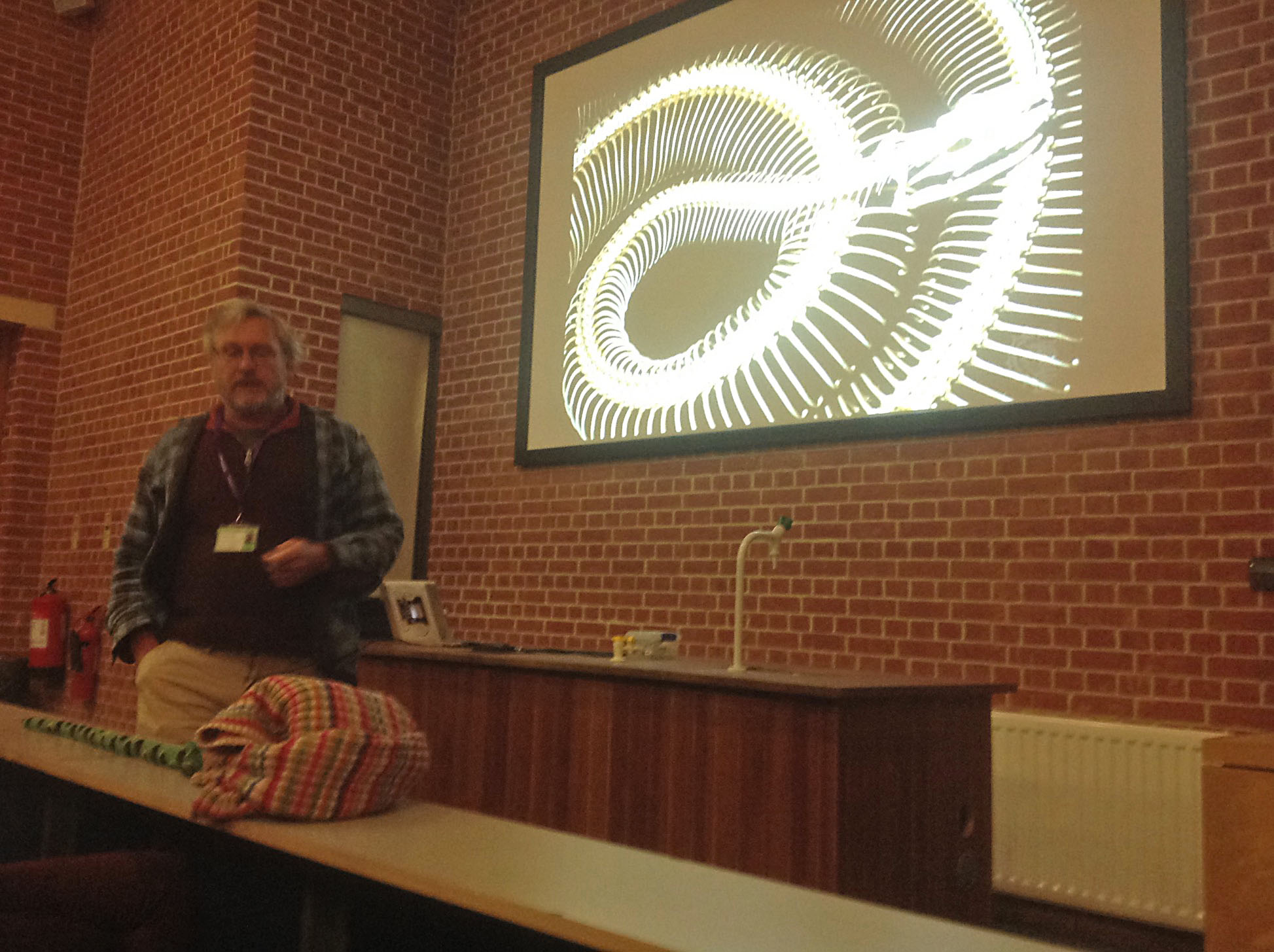 David is a reader in palaeobiology working mainly on pterosaurs, theropod dinosaurs and exceptional preservation of fossil vertebrates. He is particularly interested in the Cretaceous with projects on the dinosaurs of the Isle of Wight, the Kem Kem Beds of Morocco and the palaeoecology of the Crato Formation, Brazil. In addition, he works on the vertebrate palaeontology of two Jurassic mud-rock sequences: the Oxford and Kimmeridge clay formations.

David started as a geologist and so he comes to palaeontology from knowing all about rock types and the evolution of the planet.

Other palaeontologists start from the viewpoint of understanding animal physiology but not the geology.  They can understand the evolution of animals by analysis of DNA. For example we can look back into the history of animals to find ancestors that looked very unlike modern versions but have very similar DNA. But we do not ignore the fossil record and the ability to put a timeline together. So David still digs for fossils. He is particularly interested in periods in the middle of the Cretaceous periods such as the Albion 100 million years ago which lasted about 8 million years. At that time sea levels were much higher, possibly up to 300m higher than today because there was no ice on the planet. The Atlantic was narrow and expanding rapidly. Water flowed up over the land and this isolated animal groups. A sea ran through where the Sahara is now and all of the UK was under water except for a few mountains in Scotland. On land the dinosaurs were diversifying. Some of the largest ever dinosaurs evolved such as Spinosaurus, which was a huge fish eating dinosaur feeding from river systems that in turn flooded, changing the ecology of the systems. It is easy to see why a time of such change would inspire a lot of study.

David has recently returned from digging in the Kem Kem beds in Morocco. Across the Atlantic the same dinosaurs can be found in a region of Brazil, showing that the ocean between these land masses had not developed enough to stop animals crossing. Each year, David takes his students to a museum in Germany studying Archaeopteryx, seen as a missing link between two different animal morphologies, in this case between meat eating dinosaurs and birds. Recently the museum was hosting an exhibition on Brazilian fossils from the area where David used to work. He spotted several new species and then a slab of rock with a 'squiggly thing' on it. This was huge surprise. The label beside it said 'unknown fossil' so David asked if he could take it away and work with it.

Snakes do not have legs. Snakes are reptiles. Some snakes have attributes that make them rather different from each other. Snakes do have overlapping scales made of keratin, fish do not. Birds have scales of keratin and so did Archaeopteryx. Snakes must have evolved from creatures that had legs and they do very well without legs. There is a lot of diversity in types of snake but what makes a snake, a snake?

We could define a snake as a limbless diapsid reptile. Diapsid means it has two holes where humans have a single ear.  But a slow worm is a diapsid reptile as are some legless lizards and they are not snakes. A snake-eyed skink looks like a slow worm with small legs. The way a lizard walks involves curving its body into an s shape and the legs can become superfluous and diminish in size as the species evolves. Other creatures like an amphisbaenian are snake like and have lost legs through evolution to aid burrowing. So a lack of legs does not define a snake.

Here are some defining features of snakes. The belly of a snake has a single row of scales, while other reptiles have multiple layers. Snakes have a wide mouth gape but they cannot disarticulate. They can move the sides of their lower jaws independently. This enables them to swallow by ratcheting food back into their mouths. They have teeth that curve backwards to prevent prey from moving forward out of their mouths.  They can lay eggs or give birth to live young and some have elaborate mating behaviours. They use internal fertilisation which is rare amongst reptiles. Crucially, they have double articulations on their vertebrae. When hunting snake fossils you are going to find a lot of vertebrae and very few other bones because there are so many of them. The vertebrae have ball and socket joints and the double articulation makes them easy to identify. Snake vertebrae are found in the fossil record just after the extinction of the dinosaurs. Some of the biggest ever snakes have been found, perhaps over 18 metres long, with a body diameter of about a metre. They have existed in a huge range of environments, from deserts to oceans to forests.

Snakes may have evolved from a burrowing lizard or possibly from aquatic creatures, but the latter idea has been largely discounted. They may be most closely related to monitor lizards. Whole fossil snakes are very rare.  Some fossils show tiny legs, almost lost in the evolutionary process.  Other fossils are clearly snakes and the legs have disappeared. The "squiggly thing" had some 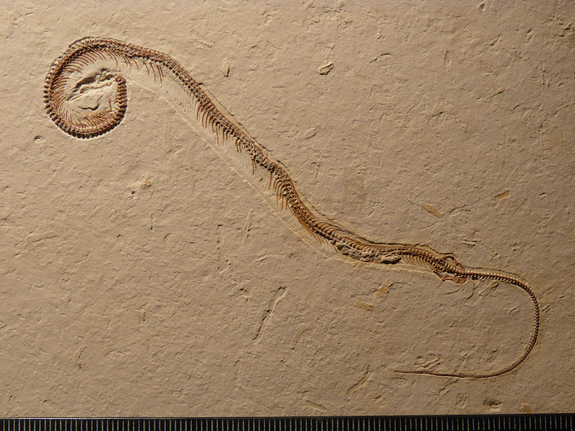 fascinating features. It had a pelvis and hind legs with a short tail. It had forelegs very close to the head. It had the impression of a single row of belly scales. It could curl tightly in a way other lizards cannot and could constrict prey the way boas do. It had the articulations of its vertebrae. The stomach contents showed it was a carnivore, eating other vertebrates.  It had backwards pointing teeth.  It is therefore a snake with legs and was named Tetrapodophis.  Here is a picture taken by David of 'the squiggly thing' that led to so much discussion and debate.