Jonathan Hare talks to Scisoc pupils about the science of Hollywood

Members of the Science Society (Scisoc) flocked to the David Jones Lecture Theatre on 15 November to learn more about the science of Hollywood. 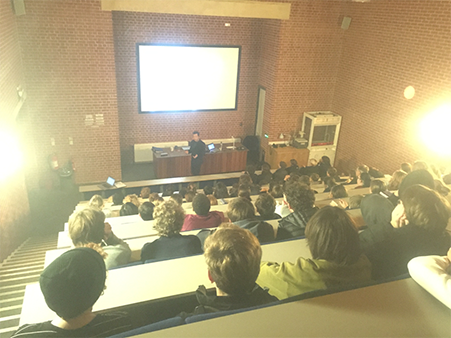 Hosted by Jonathan Hare, the packed lecture theatre was treated to a talk that delved deeper into the science behind the big screen. The lecture was based on four popular films: The Moon, Up, The Bourne Supremacy and Speed, which all raised scientific questions.

Analysing The Moon, Jonathan looked to answer the question ‘is mining helium on the Moon a feasible energy source for humans?’  With the use of calculations based on a small canister of 3He, Jonathan reasoned that the cost would be a problem and believed, in the long term, solar power would be a more feasible alternative.

The Bourne Supremacy was next to face scrutiny, this time asking if a severed gas main could blow up a house. While there has been a real-life example of this happening, Jonathan explained that in the timeframe shown this would be unlikely, instead proposing that gas explosions cause a whoosh instead of a bang.

Speed was the final film to be reviewed with the question of whether a speeding bus can jump a 50ft gap. The stunt was quickly disproved; however, a suggestion that the bus could make the jump off a 15o incline was made.

Overall, the lecture answered a number of scientific questions surrounding Hollywood and only helped to further develop our pupils’ understanding and interest in the subject.