This season for the Bryanston Racing Greenpower Team has been a frustrating one. We ended the 2019 season on a high, having managed to get both of our race cars to qualify for the international final at Silverstone. We placed mid table behind cars that had lots of investment and we had lots of fantastic ideas on how we could develop our race cars. 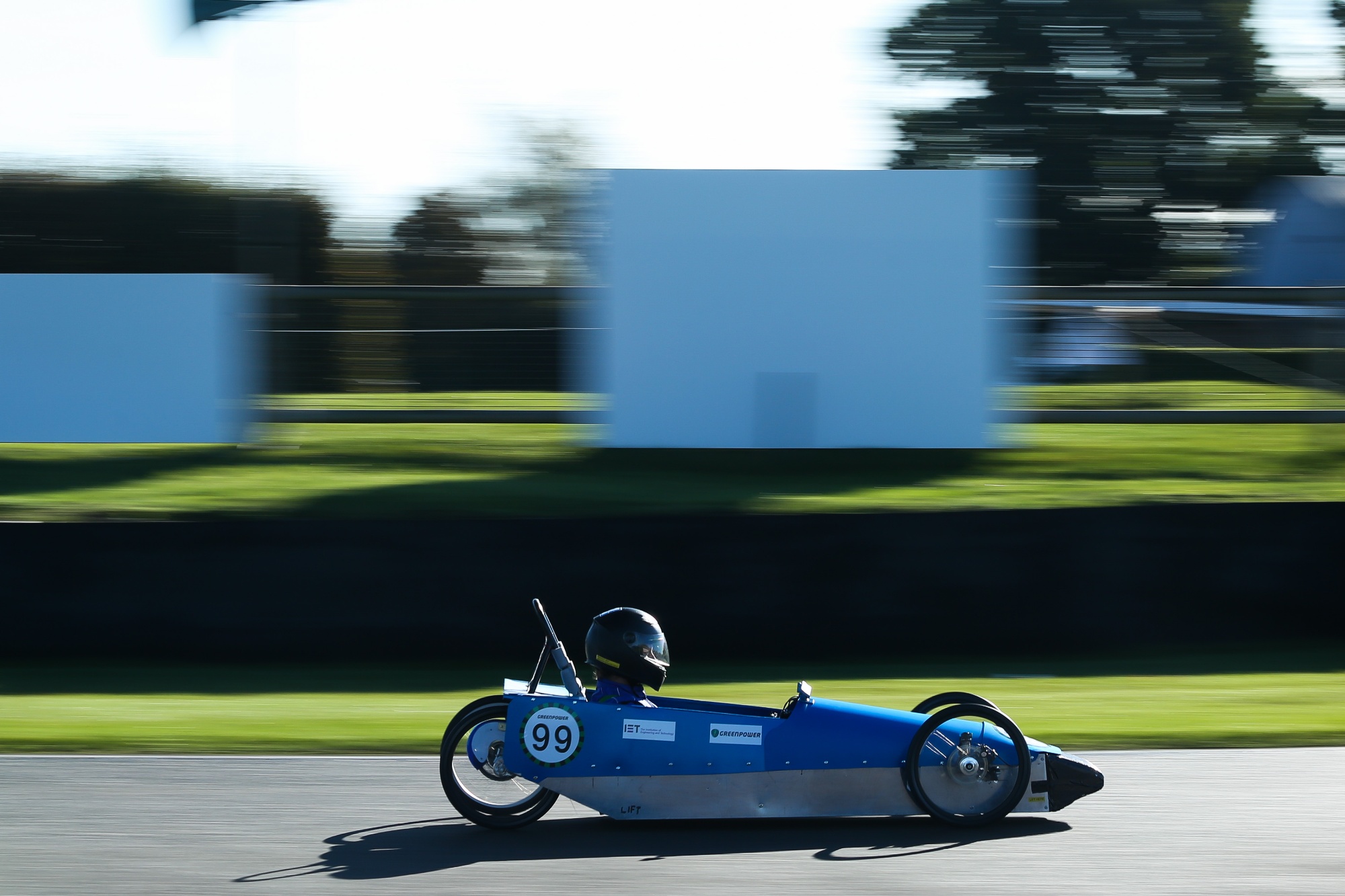 On our return to Bryanston we started work on the redesign of the rear end and drive system on our SPN1 car and the development of SPN3, a completely new car to replace SPN2. SPN1 had its rear end removed and SPN2 was stripped back to a bare chassis. The idea was to completely rebuild the car as a monocoque structure. Drawings were drawn, models modelled, and test pieces tested. And then Covid-19 struck and we were all sent home.

During lockdown, the Greenpower ECA continued to run. Although we were unable to work on the car, our teachers organised and hosted a number of inspirational weekly talks from former Bryanston and Bournemouth School pupils who are now engineers, product designers and entrepreneurs. These included a couple of Dyson employees who had worked on their electric car, a designer at Williams involved in the design of E-sport batteries, and the MD of a company developing facilities and infrastructure for charging electric vehicles on the roads of the UK.

During this time all but two of the Greenpower events across the country were cancelled. The first coincided with us returning to school at the start of September, and the second was in early October. We were determined that we would take part, even though both of our cars lay in pieces. We also faced another problem; the C and new D pupils were on weekly rotations for their ECAs, and the B and A pupils were timetabled for games during our usual Greenpower ECA slot. We negotiated with our teachers when we could go in and work on the cars, and then set about getting race ready.

It was clear in the time that we had that we would be unable to get both cars up and running. It was decided that although SPN2 was less competitive, it would be easier to reassemble than SPN1, which had no back end. Due to the age of the current team members, it was also decided to enter the F24+ category for the first time (16 to 25-year olds) instead of F24 (16 and under). This meant that we would be racing against the big boys and girls in a format that was new to us. 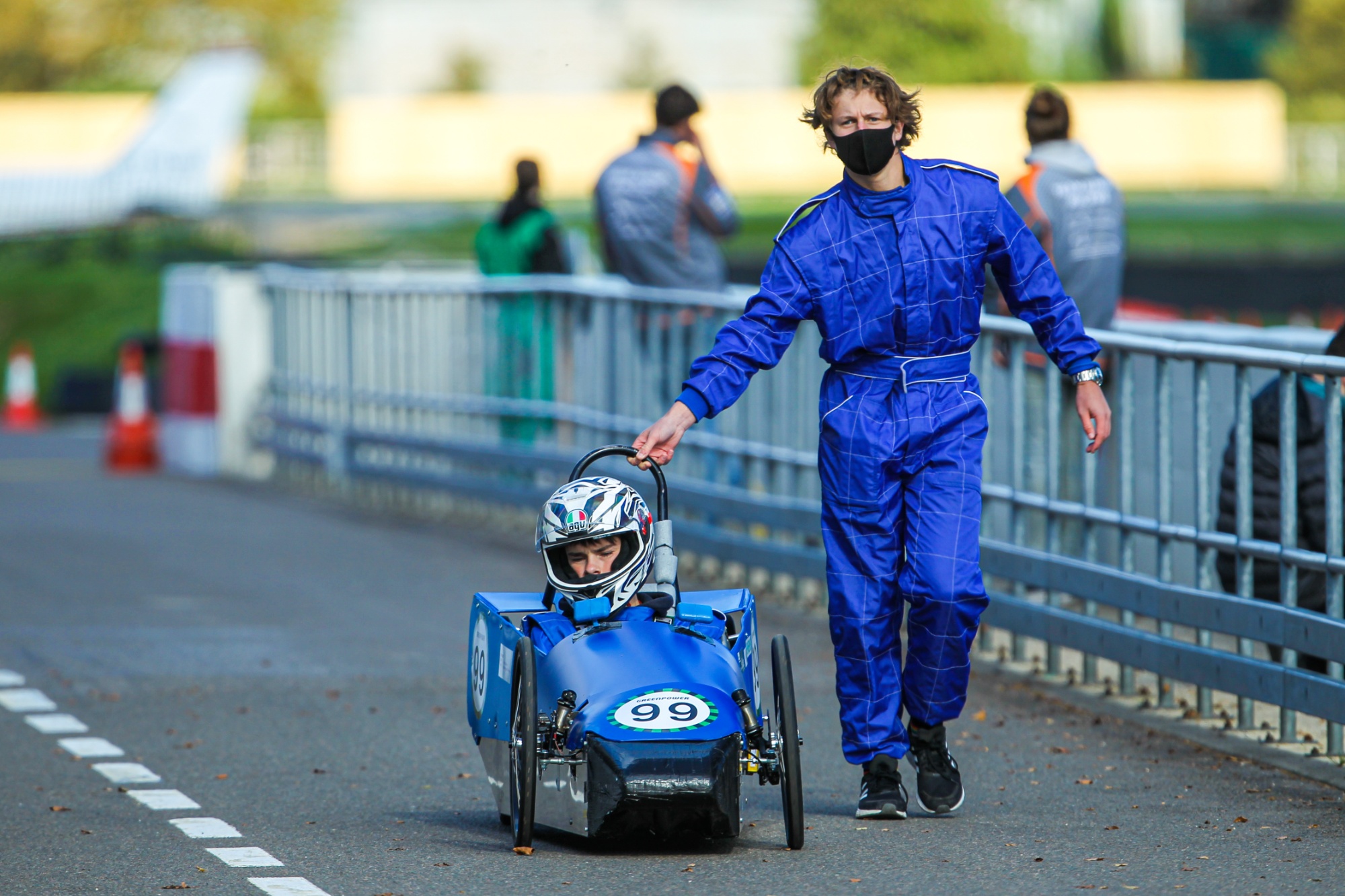 With help from our teachers and the D&T technicians (thank you Tony and Dave) we managed to get SPN2 back together (with new bodywork) in the nick of time. Some parts that had been disassembled needed replacing, and much of the wiring was old and damaged, so it took a lot of work to get the car back up to the stringent safety standards expected by Greenpower. Due to Covid restrictions at the race event, we had to give our car an MOT and send the information off to the race organisers. This meant checking the integrity of the bodywork and roll bar, the efficiency of the brakes, the position of the driver, the operation of the steering, security of the five-point race harness, attachment of our new race number (99) and ensuring that the brake light worked (something that kept Freddie C busy for several hours!)

On the eve of race day, after Saturday morning school, we loaded up the Bryanston Racing trailer. As well as the usual tools, spares, car and batteries, we had to make sure that we remembered wipes, hand sanitiser and face masks. With everything packed we were ready for Goodwood, our only race of the 2020 season.

Sunday saw us getting up before the crack of dawn. With packed breakfasts, lunches and suppers collected (thank you catering) we met outside the technology centre at 5:30am. After some issues with the trailer lights were sorted by the teachers, we set off for glorious Goodwood. With little traffic on the roads that early on a Sunday morning we made steady progress and arrived at the venue with plenty of time for scrutineering before the first practice run. We had a whole pit area to ourselves, so we had room to set up all of our equipment, plus a table and (socially distanced) chairs. We could not get over how empty the whole place felt, with only 20 teams and 30 cars in attendance. The usual buzz of a race day was definitely missing.

Straight away we ran into a couple of snags before scrutineering. One of the rear innertube valves was leaking leading to a flat tyre, and when we connected up the first practice batteries, the car wouldn’t start. A quick bit of fault-finding led us to a spade connector that had shaken off during transport and the leaking valve was soon fixed. The car then flew through scrutineering. We were ready to race. 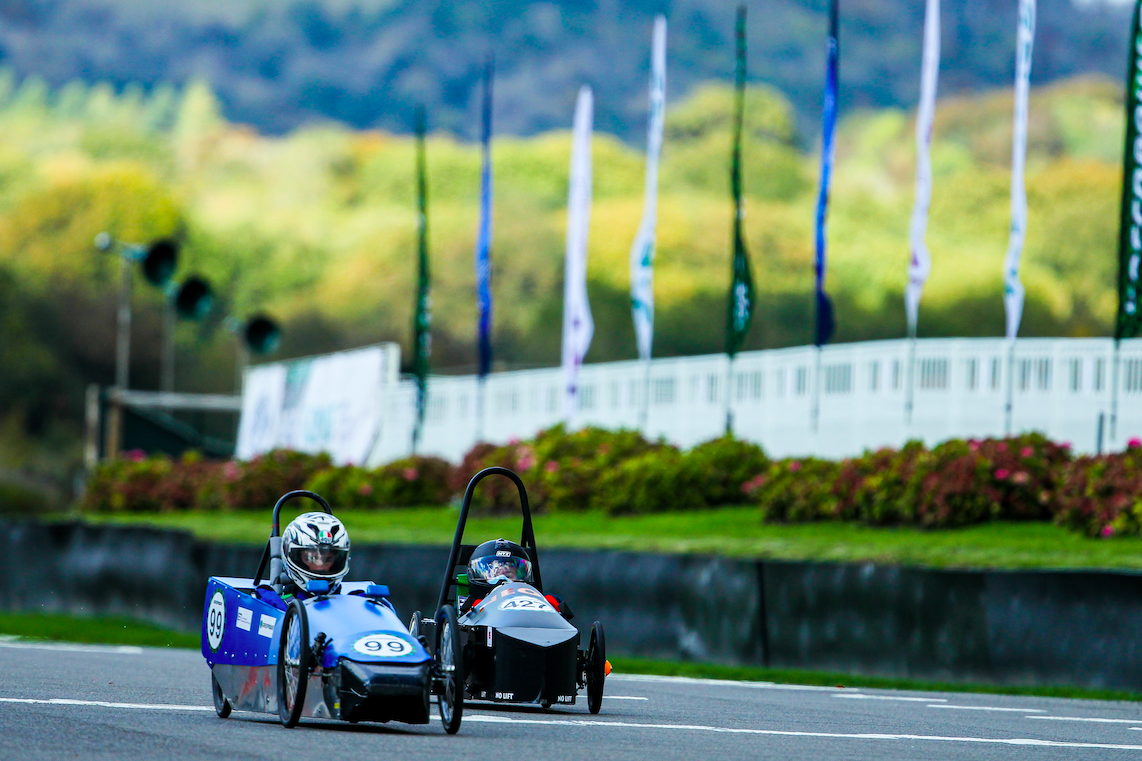 Our first driver took SPN2 out for a quick shakedown. With strict instructions to ‘take it steady’ he started lapping the 2.4-mile circuit in the high eight minutes, giving an average speed of around 17mph. As the car felt good, he steadily increased the speed until he was lapping in around six minutes. After a not so quick driver swap (having to clean down and sanitise all of the surfaces), our second driver took the car out for a few laps to get a feel for the circuit. Following a short break and a change of batteries, the car was taken out for the second practice session. Again, building up the pace slowly it started to reach speeds of around 25mph, close to where the car usually sits during events.

The races were in a different format to normal due to Covid restrictions. F24 usually runs as two 90-minute races, with an hour long F24+ race in between. However, with teams having to clean down cars between driver changes the day was broken down into four 20-minute races with a 35-minute break between each race. For the first race both car and driver performed steadily, and everything ran smoothly. The pace was good with four laps being completed by the chequered flag. Evelyn K brought the car back to the pits and checked it over before pushing it to the starting grid for race two with our second driver.

Again, pace was good at the start of the race, and the team was confident with how the race was going. The car was feeling good and moving through the field steadily. Then it didn’t cross the line when expected. The recovery vehicle went out, but there was no marker against car 99 to show an issue. Eventually it crossed the line, but it was obvious that it had been struggling.

After being escorted back to the pits by Evelyn K, the car was checked over. The motor was extremely hot, which for the cool conditions seemed unusual, but there did not seem to be anything obvious causing the overheating. The wheels were spinning freely and the drive seemed to be running smoothly. Perhaps the batteries that we thought would perform the best in the race had dropped off much more than we thought they would? 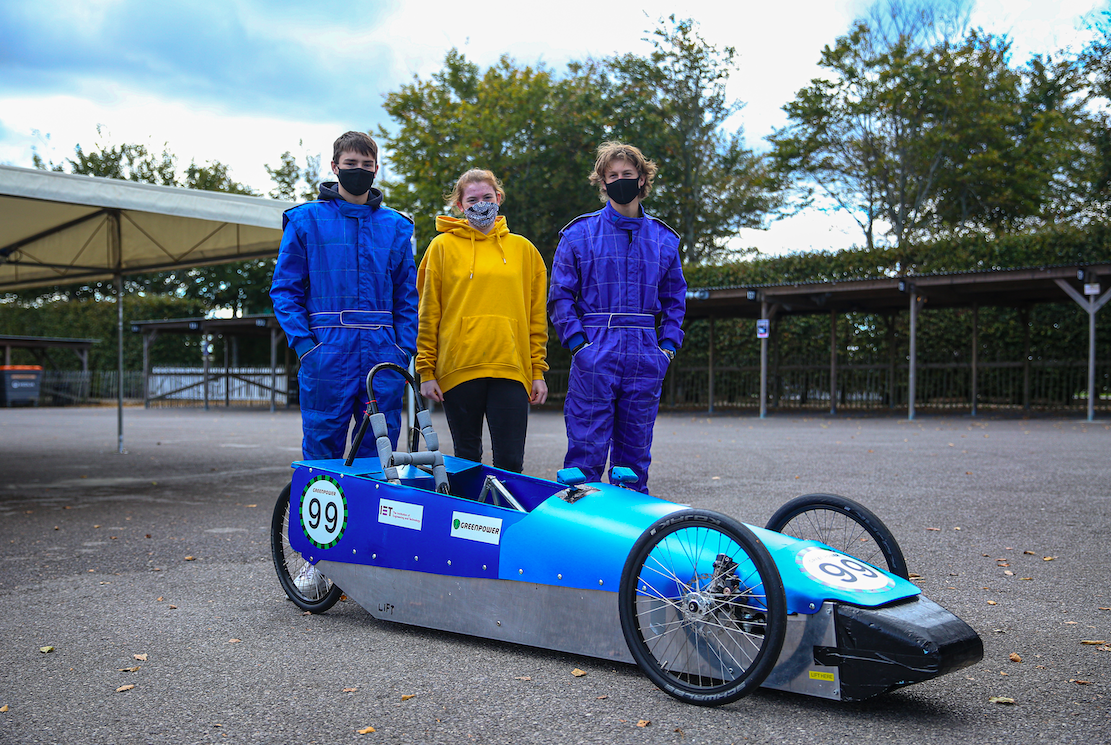 After a short recovery period, we were ready for race three with another driver swap. The start was slow so as not to drain too much power, but steadily the speed was increased. The first lap was completed in a mid-six-minute time which was better than we were anticipating. However, partway through the second lap, disaster struck. There was a race incident, with the race being red flagged. All competitors had to stop, and the ambulance and recovery vehicle were dispatched to the far side of the course. The chance of car 99 being involved were slim, as it would not have made it that far round the circuit. Eventually two cars (from the same team) were recovered back to the pits with both drivers shaken but otherwise uninjured. The race was restarted, and we waited. And waited. And waited. The race ended and yet SPN2 was nowhere to be seen. The recovery vehicle went out onto the track but returned with another vehicle. We assumed that our car would be recovered next, and so we returned to our own pit and waited some more. Eventually it turned up, being pushed by the driver from the pit lane. The car had made it back under its own power, but at an incredibly slow speed. When the race had been stopped SPN2 was on a hill. The restart had drained the little power that was left in the batteries but wanting to retain the team’s dignity SPN2 was nursed back home under its own power. As the event rules prevented us from swapping batteries, our race day (and the 2020 season) was done.

So, what of the future? We still have plans to complete the new drive system on SPN1 and we have lots of ideas that we want to try on SPN3. These include having a way of monitoring the current draw on the batteries and the motor’s revs, so that the car can be driven at the most efficient speed possible. We have an idea for a new composite construction method that we think will give us a strong monocoque construction but also be lightweight and aerodynamic. We need to minimise friction, condition our batteries, but most importantly keep having fun while learning about engineering. We have pupils across all year groups involved in the teams, both girls and boys, including scholars and Arkwright Award nominees.

Currently we do not have any sponsors for either car. We would be interested in hearing from any individuals or companies that could help us – this could be through team clothing, parts or materials, machining services or money towards the cost of building, maintaining, and entering the cars into events. Please email Mr Moggeridge in the D&T department via tim@bryanston.co.uk if you’d like to get in contact.