This year's A3 festival was another wonderful weekend full of artistic endeavours all around the school. 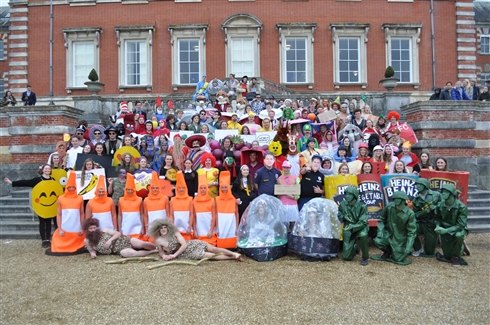 Once again the A3 year group astounded by managing to stage seven plays, involving an astonishing 90 pupils and covering a huge range of styles and subject matter. There was the weird and wonderful Silas Marner the Musical, which somehow managed to turn a serious novel into a riotous 20 minutes of bizarre characters and ABBA songs! Then there was the joyful jamboree that was Cinderella, complete with fairy godmother, a Prince Charming who loved his non-puns and, of course, more very energetic dancing. Modern Family showcased a totally dysfunctional but very funny group of performers who played to two packed houses in Grosvenor, whilst Toy Story, a huge hit of a fine ensemble piece with lots of great character acting, presented the most terrifying villain the festival has seen for a very long time. Breakfast Club was the most hard-hitting of the plays, with some very convincing and committed acting from the entire cast. Private Lives was an ambitious project for a small but very talented cast who brought this Coward masterpiece to witty and enjoyable life in Marriner. And finally there was Adrian Mole, a tightly directed and impressively acted play, hugely enjoyed by audiences crammed into Robson Fisher. The plays were attended by very large and enthusiastic audiences, many thanks to all who came to support the performers.

There was some outstanding music again this year, ranging from the bands' gig in Coade Hall through to the brilliant classical and acoustic performances in the Main Hall. Individual performers shone, but it was truly impressive to see so many bands and small groups playing together, and so successfully too.

The school was full of eye-catching and creative little art installations and exhibitions: photos and prints - squashed faces, strange amalgamated faces, lips, eyes - you name it! The rainbow strings, the white badges suspended under the dome and of course all the little people lurking where you least expected them...

And then there was the fashion show, with some very creative costumes including a skirt made entirely of Bryanston charts. The films were possibly the best ever, fun and varied from Flirty Ducks and Selfie Slapped through to the technical wizardry of Living Paper and of course the brilliant Sweet Child of Mine.

Huge thanks to all the A3 year for their energy and enthusiasm, and for their excellent behaviour throughout. Big thanks also to the technical team, who once again made a very demanding task look very simple, and to all the teachers who gave up their time to support the A3s and to help them create such a memorable weekend.