On 10 March Bryanston held its Spring Concert at The Lighthouse, Poole. Here is a review from one of the performers. 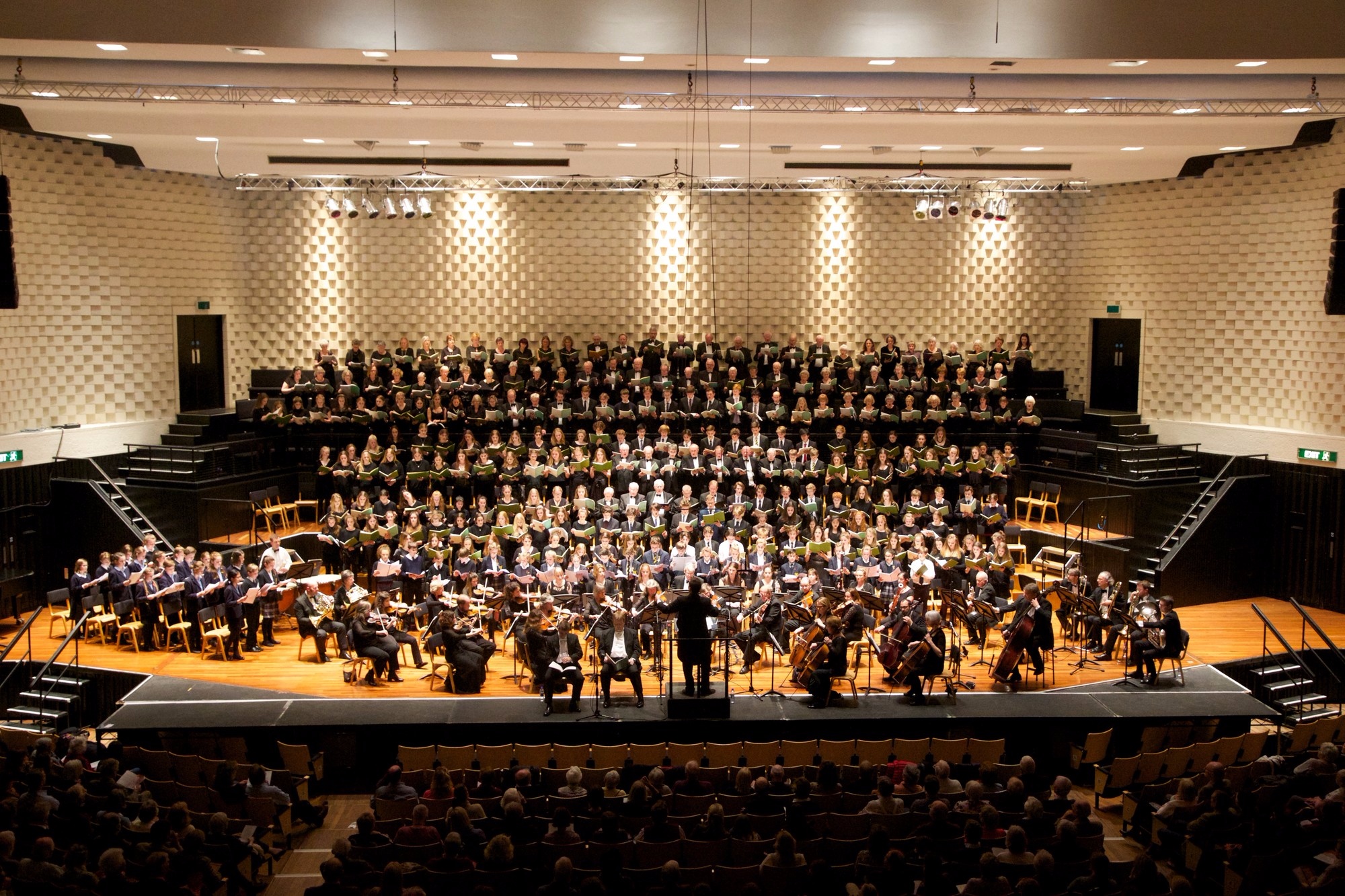 The Bryanston Spring Concert is a showcase occasion, and this year was no exception. The leading school instrumentalists have the opportunity to play with a professional orchestra led by Christina Scott, and the Bryanston Choral Society combines with the school choirs to produce a big performance.  All this takes place at the Lighthouse in Poole, the main concert hall of the Bournemouth Symphony Orchestra.  What’s not to enjoy?

The programme began with the first movement of Borodin’s Second Symphony.  This is a very elemental work, with its modal tonality and primitive rhythms dominated by the brass.  The professionals were joined by members of the school orchestra and Duncan Emerson drew from them a vivid, exciting and colourful sound, evoking a truly Russian atmosphere.

The next part of the programme moved to France, starting with a performance of the second movement of Ravel’s Piano Concerto in G minor with Poppy H as the soloist.  She established a wonderful serenity from the start with her controlled playing, while the orchestra provided a subtle accompaniment.  The calm of the opening gradually changed into a more demanding middle section, with the piano providing some virtuoso display over more dissonant playing from the woodwind. The movement ended with the return of the opening melody on the cor anglais while the piano danced around it.  The piano playing presented a wonderful sound palette and was musically aware at all times.

There is an intriguing story that Cecile Chaminade made her Concertino for Flute fiendishly difficult in order to punish a lover who left her to marry another.  Whether this is true or not, it presented no problems to Charlotte H.  Over a densely scored opening for the orchestra, virtuosic passages for the flute emerged, which gave way to a faster, rhapsodic middle section.  Charlotte’s display never faltered, and a brilliant cadenza heralded the return of the opening theme.  The piece ended with an exuberant flourish.  The flute playing made light of the difficulties of the writing and left the audience marvelling at the exuberance of it all.

Another French composer, Saint-Saens, provided the next item in the concert and, again, the demands made on the cello soloist, Evangeline C, were considerable.  This, one of the favourite works in the cellist’s repertoire, has all the ingredients of Romantic display. The bravura of Evangeline’s playing at the beginning was followed in turn by lyrical richness and animated virtuosity, and the antiphonal exchanges between her and the orchestra crackled. In the end she wins, as her final thrust is received in silence and the movement ends.  Evangeline’s playing is full of youthful confidence, displaying flair and musicianship and was a pleasure to listen to.

The first part of the concert returned to Russia and a saxophone concerto by Glazunov.  The piece is a single rhapsodic movement that freely explores a wide range of tonalities, colours and moods, and it proved an ideal vehicle for Sophia E.  Rich sonorities in the strings provided a solid support for the mellow tones of the saxophone and Sophia’s phrasing was exquisite. She was always aware of the balance necessary between orchestra and soloist and the rhythmic attack in her playing was exciting.  Particularly noticeable was her control of dynamics and the authority she held over the performance.  A rousing end to the first half.

And so to the second half.  For this performance of Puccini’s Messa di Gloria the orchestra was joined by a choir of 290 performers.  These were drawn from three prep schools, Dumpton, Port Regis and Walhampton, from the Bryanston choirs and the Bryanston Choral Society.  The two soloists, Richard Rowntree and William Gaunt, played powerful roles, both on their own and in conjunction with the choir.  Puccini wrote his Messa di Gloria as a student of 18.  He had already decided that he wanted to write operas and echoes of his hero, Verdi, can be heard here.  He has a good grasp of compositional techniques and the piece is full of youthful energy, passionate utterance and dramatic moments, with wide dynamic contrasts and an operatic awareness of the words of the Mass.  The work is always compelling, the colours kaleidoscopic, and the mood ever-changing in accordance with the words.  It is a singer’s work: the tunes follow each other with such verve that there is never any doubt of their intent and they stay in the mind long after the event.  The performance thrilled with a richness that will remain with all those who were there.

So, congratulations and many thanks to all those involved, to singers and players, and to those who worked so hard behind the scenes.  Especially, though, to Duncan Emerson, for creating such a demonstration of the richness of Bryanston’s musical talents.

You can view photos from the concert here.