The Junior Ensemble Concert took place in the Elder Concert Hall on Wednesday 18 November 2015 at 8.15pm. Although the majority of performers were younger pupils, musicians from all year groups were involved in this lively and enjoyable concert.

The Rhythm and Blues Band, coached by Dugald Clark, started with two cracking pieces, Tears Dry On Their Own by Amy Winehouse and Lady Marmalade by Crewe/Nolan. The performers were: Georgina A and, Nicola H on flute; Adrian C, James B, Darcy H, George O’R, Katharine O, Lotte T, Millicent VG, Molly P, William E, Charles E and Max B on alto saxophone; Jack S on guitar; Sebastian H on bass guitar; James R on piano; James E on drums; and Carolina B, Isabelle D and Lotte T on vocals.

A new D Band played Do I wanna know by Arctic Monkeys. Mr Shaughnessy standing in at the last moment for Alex T on guitar who hurt his hand in rugby, Charles H on bass, Ben S on drums and Eleanor P on vocals. The Recorder Duo followed with a polished and charming performance of Trio Sonata: Preludio – Allemande by Boismortier. Well done to Francesca G and Naima H accompanied by Mr Scott.

Huge thanks to all of the performers. 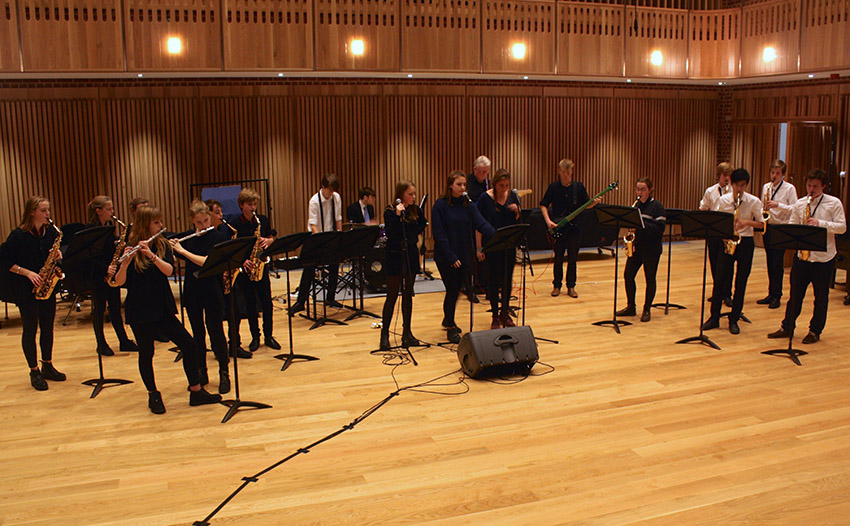