The London Concert is one of Bryanston’s musical highlights of the year and this year’s concert on Friday 19 October at St Paul’s Knightsbridge was no exception.

This concert was even more notable as it was the first major musical event under the direction of Mr Stephen Williams, the new Director of Music. The musical entertainment began in great style with the Concert Band, conducted by Mr Clark, playing a medley of songs from Grease which certainly got the evening off on a high. This was followed by a brilliantly lively rendition of an arrangement for Concert Band of the theme from The Simpsons. The enjoyment on the faces of the pupils playing was clear for all to see.

There was then a complete scene change with Freddie F musically transporting us to Paris with a stunning performance of Te Deum by Jean Langlais. Freddie’s wonderfully assured playing of this technically challenging piece wowed the audience as the pews rattled under them with the great pedal notes. The fine organ of St. Paul‘s was delicately employed again as the String Chamber Orchestra, conducted by Mrs Scott, played the famous Adagio by Albinoni. In the latter stages of this piece, Kate S displayed her wonderful violin playing with the beautiful solo cadenza. There was a wonderful musical interlude as Clara W, Kate S and Sumei B-S performed the bright and playful Overture to Suite for Violin, Clarinet and Piano. Again, the light-hearted nature of this piece hid the virtuosic challenges faced by the pupils. The first half of the concert came to a close as the Symphony Orchestra took to the stage under the baton of Mr Williams.  Amadea D-G gave a stunning and thoroughly compelling performance of the first movement of Mozart’s Concerto for Horn in E flat.  The first half was rounded off with a rousing arrangement of the main themes from Pirates of the Caribbean, and thoroughly entertaining it certainly was.

The second half of the concert started with another stunning solo performance performed by Clara W playing the slow movement of Mozart’s Clarinet Quintet. Clara played this with incredible sensitivity and wonderful control of the long arching phrases. Then came the turn of Chamber Choir directed first by Mr Ings performing Monteverdi’s Beatus Vir. This performance was supplemented by a glorious solo verse sung by Sumei B-S and LingLing B-S with lively accompaniments from Mrs Scott and Kate S on violin obligato duet and Mr Scott at the organ. Mr Scott then took the reins and the Chamber Choir sang the beautiful choral song by Parry, There Is An Old Belief from the Songs of Farewell. This was hauntingly sung and the spellbinding effect on the audience was palpable. There followed a change of scene with the Big Band taking to the stage to perform three numbers. The highly rhythmical and energetic arrangement of Duke Ellington’s It Don’t Mean a Thing, followed by a sumptuous rendition of Love Is Here To Stay with a wonderful solo vocal from Grace Baldwin and finishing off with Happy by Pharrell Williams. The Big Band is always one of the highlights of the show and this year’s performance was no exception!

After Allegri Choir had got into position it was their job to finish the concert in style and this they certainly did. Eric Whitacre’s Sleep was first and the huge vocal complexity of this piece was beautifully caressed into a stunning and very moving performance. The concert was completed with Music Lead the Way by Laura Farnell. This highly energetic and rousing performance even had the audience clapping along loudly and was a very fitting end to a stunning and highly entertaining even of musical performances of the highest quality.

Bravo to all of the pupils who were involved in this great evening. 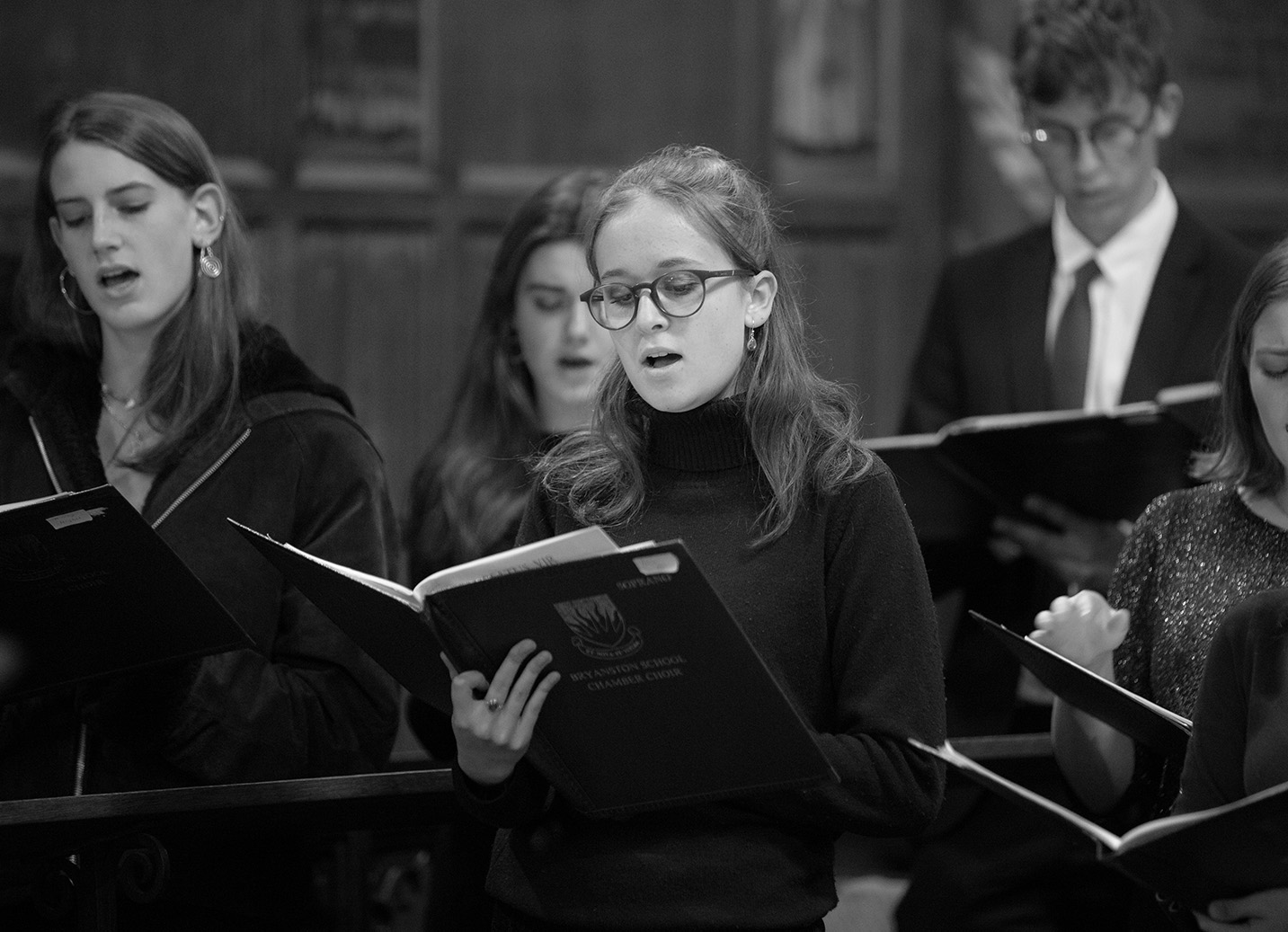