This week we welcome our Deputy Head (Academic), Dr David James, who reflects on the importance of face-to-face relationships. 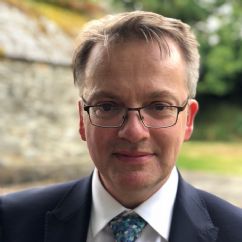 Evidence seems to grow each week that mobile technology could be playing a significant role in the rise of mental health issues among young people. Of course, being online is not in itself a bad thing: you could be on Google Art Project researching Caravaggio, while listening to Handel’s Messiah on Spotify. There are endless opportunities to be educated and uplifted on an iPad or mobile phone, and it should not be forgotten, in the rush to ban technology from our schools, that, as one teacher puts it, not all screen time is equal. This is complicated enough when one is an adult: we should know when to close the lid of the laptop, or to switch our phones to airplane mode in order to get some rest, or to read a book. Having said that, many parents are as guilty of modern social faux pas, such as phubbing, as their children. How many meals have been ruined because Mum or Dad simply has to reply to that email? But teenagers may be under more pressure to keep Snapstreaks going, or to move to the next mission in GTA without letting their friends down, than adults are to keep email correspondence alive. To adolescents, friendships and being accepted by others have always been of profound importance. And, like much of the world today, a lot of that has moved online, which in turn has made it - and the possible concomitant shaming - more public.

Such things shouldn’t surprise us. But what should alarm all parents and teachers (and indeed anyone with any interest in the wellbeing of young people) is that social media companies have deliberately made their sites as addictive as possible. When Sean Parker, an early investor in Facebook, claims that the company is deliberately “exploiting a vulnerability in human psychology” then the laid-back West Coast mask that Mark Zuckerberg wears begins to slip a little; and when Parker admits that Facebook’s effect on children “literally changes your relationship with society, with each other...God only knows what it’s doing to our children’s brains,” then the reality dawns that these new companies may be just as ruthless at exploiting human frailty, and addictive tendencies, as Marlboro, McDonald’s, and Jack Daniels. As Roger Daltrey once famously sang: “Meet the new boss, same as the old boss.”

Where do schools fit into this? Well, we could go to one extreme and ban all technology from our site (just as a junior school popular with Palo Alto CEOs has done, which in itself raises some disturbing questions), but we suspect that teenagers, being teenagers, will find a way around that. In addition, parents understandably want to keep in touch with their children when they’re at boarding school, and so even asking pupils to hand over their devices for long periods of time (as is becoming popular in some US schools) presents certain problems as well. Plus, to reiterate what I said before, there is so much wonderful stuff out there that actively aids learning that only the most retrogressive and anti-intellectual educational establishment would contemplate switching it off at source.

But perhaps the solution to the challenges that technology is presenting us with now is, literally, staring us in the face. And what we’re looking at is another human face. An anecdote that might illuminate my point. When I was interviewing a pupil who wanted to join Bryanston from her day school last term, I asked her why she wanted to give up the 4.15pm finishes, and have lessons on a Saturday. Her answer has stayed with me ever since. She said: “I’m a face-to-face person, and I guess this is a face-to-face place.” She went on to say that the many arguments that teenagers have via WhatsApp and Snapchat tend to escalate after school. By the time the pupils return to school the next day, or on Monday, grievances have deepened because correspondence has occurred via text, not voice. We all know that a simple statement like “I hate you” can be spoken with venom and with humour, and how we modulate our tone makes all the difference. But as a flat, written text, it can be destructive. For my interviewee the answer was simple: she wanted to talk to people, and in doing so form bonds and friendships that are robustly independent of Zuckerberg’s nefarious network. For her, Bryanston would provide her with more opportunity to make real and lasting friendships. Through articulating our ideas to others we make sense of our thoughts to them, and to our own self, at the same time. For young people this is an essential part of establishing their own identities. In time, I have no doubt, the miracle that is the human voice will win out over cold digital dialogue. Ideally, both will add richness to our lives. But it is perhaps only in a boarding school that the time and space, and the opportunities, are so varied, and allow for such ongoing interaction, that our young people develop in a more fully human way.