Would you let your child cut your hair? Boredom, bending and blurring

Head of Pastoral Preetpal Bachra brings us the latest insight into his family life in lockdown. Preetpal suggests that boredom is where creativity is born and imagination flourishes, that compromise is key to living in each other’s pockets and that baby steps are required for approaching anything new in this current climate…

At some stage term ended and the Easter holidays officially started, but I could not tell you exactly when without trawling through my diary – and I say this both as a teacher and a parent. That familiar, definitive shift from not having to worry about where the children are (i.e. at school) to wondering why they have an aversion to any pre-midday wake-up time has been muddled by a raft of remote working practices and waves of information and feelings. End of term and start of holiday blended into one with no warning.

Holiday time does not usually cause particular stresses for me as working in a boarding school gives a regular insight into the behaviours of teenagers. There is also so much more that is known about adolescent brain development that we now have a better understanding of teenage behaviour. There are some very good summaries available for parents that range in length from one page to articles with more biological explanations. There is a fantastic series of talks by Alicia Drummond at Teen Tips and she also offers a daily interactive Q&A session. Practical tips for parents are also available from charities such as Young Minds.

Therefore, living in a house with two teenage boys, whilst having its ups and downs, is never hugely stressful for me – though I am sure not everyone shares this experience. However, peculiar to this Easter break, there has been greater uncertainty for all of us.

Uncertainty comes from the news and some from the ‘adult-stuff’ decisions we are facing in our own lives regarding what our working and living environment might look like as well as the community and global picture. That level of uncertainty can blur thinking rationally and the same is true for children too. They have their own worries; they may now also be trying to make sense of our worries and often have the additional burden of struggling with boredom. This week I have been thinking of the transitions that have crept into our lives and how life has been characterised by boredom, bending and blurring.

Boredom is a feeling that has mixed reviews. It endures the accusation that it is the cause of risky behaviours and Simon Vincent in an earlier blog has identified the natural tendency to risk from teenage boys in his care. However, boredom is also where creativity is born and imagination flourishes. Having no one to play with during the summer holidays, I spent many afternoons practising cricket by batting on my own in the back garden. The process was to throw a ball against the wall of the coal room (surely this isn’t just a northern industrial town house feature?) and quickly get the hand back on the handle to play my shot. Years later it turned out be my undoing as any straight bowling that wasn’t lobbed off a wall at 4mph and bounced twice before I thwacked it into the side of the garage would guarantee my wicket against their name. However, I scored some fantastic centuries for England in that back garden, often single-handedly keeping Holding, Marshall and Garner at bay. Boredom can breed creativity because when we are bored, we must either endure it or it must be relieved or escaped. Our challenge is to do so constructively and with fun, even if it might appear slightly ridiculous. 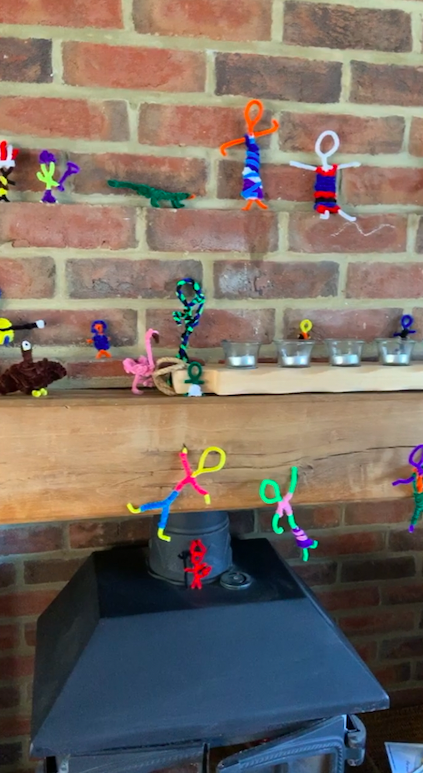 Some of my tutorial pupils have dealt with boredom well. One has pushed his parents to finally agree to remove the rotting decking at the bottom of the garden and ripped it up himself. Another has improved some sports skills and videoed for analysis. Another began by making a person out of a pipe cleaner which led to the creation of a whole village of people made from pipe cleaners. He has also recorded himself singing and playing a number of cover versions, my favourite being I Started a Joke and not just because I am a Bee Gees fan or that I am delighted he knows one of their lesser known songs, but rather because he is just very, very good. (Incidentally, Robin Gibb in an interview claimed that the idea for the melody for the song came to them all whilst they were bored on a flight to Essen and they were inspired by the sound of the British Airways Vickers Viscount 4 prop engine that seemed to sound like a church choir!)

So, boredom can be ok, and we must acknowledge that coping with boredom is an essential part of life. However, the blurring of lines between term and holiday means I sometimes revert to the tired line of asking my children, “What work have you done today?” When I remember my own advice, I ask, “Is there anything you think we could do today?” This has led to some great new experiences and a return to some forgotten pastimes (though being ‘sledged’ during a game of chess is perhaps a modern teenage boy phenomenon). The greater length of time together, however, does also raise the challenge of coping with each other. Indeed, it would sometimes be useful to have social distancing rules in the home and certainly useful for teenagers to understand compromise.

The beautiful Jason Mraz song I Won’t Give Up contains the poignant line ‘For us to work we didn't break, we didn't burn. We had to learn how to bend without the world caving in’ and living in families, as in a boarding community, means we don’t get our own way all the time. We have to bend sometimes, without ‘caving in’. Another word for bending may well be compromise and it is often heard in a household with teenagers – though usually preceded by “why don’t you just…?” Certainly, compromise has been a central feature of all our lives as there are limits to what we can do and where we can go. We will have to compromise in the coming weeks as we adapt to what is manageable and endurable with remote learning.

Context significantly helps in dealing with these adjustments. Claire Bray has organised the ‘Clap for Carers’ for those who live on site and we met last Thursday around Hunter Loop. Of course, it felt strange seeing those that we normally sit with now standing at some distance, but it does make one reflect on the astonishing work of medical teams around the country. In fact, it inspires awe in their work.

Another facet of compromise is knowing when to say things. Nancy Kline calls this technique ‘wait until Thursday’. In her collection of letters to her goddaughters entitled Living with Time to Think, she suggests that this strategy of taking time to think before we raise issues that cause discontent is a cousin of, or a road to, the more well-known strategy of ‘choosing your battles’. One Saturday, a crystal vase given to Nancy by her mother is moved by her husband from the conservatory table to the store cupboard. Nancy feels this is a slight on her American heritage, her relationship with her mother and her choice on the vase. It leads to her feeling upset and angry but instead of charging to confront her husband, Christopher, she decided to ‘wait until Thursday’. In that time, Nancy calmed down though was still hurt but now had time to ponder how to raise the issue calmly. On Thursday, she approached Christopher and asked, “You know that vase of my mother’s…?” Christopher replied, “Yes, where would you like us to put it? I wasn’t sure it was safe in the conservatory, but I didn’t know where you might want it. Where would you like it?”

Had the matter been raised on Saturday it would not have been conducted in a calm fashion and ‘calm’ is usually a good way to approach teenagers.

So, compromise is central to living in each other’s pockets and this is crucial when traditional boundaries and jobs are blurred. Home space will need to be study space, workspace for parents and social/eating space. A holiday routine must become a school routine with teenagers now needing to get up and get dressed for school. It also means that we have to take on different jobs and tasks. In short, there will be some blurred lines in our hitherto familiar roles.

It is a standing source of teasing in our house that my wife, Sarah, has a surplus of hand cream. Most drawers, car gloveboxes, bags and even surfaces will find a half-used tube of hand cream. We are all part of the problem, of course, as it is one of our go-to presents at Christmas or birthdays, but such astonishing proliferation cannot be explained by gifting alone. Sarah must squirrel some of these from her own shopping ventures, although she denies it. To prove our point, last year the boys and I searched the house for all the hand creams and filled a mini hamper to offer as evidence. Still no acceptance that the hand cream hoarding was an issue.

Imagine, then, my sheepishness when I asked Sarah if I could use some hand cream as my hands were ‘a little dry’ from such regular washing (a first world problem if ever there was). To her credit I was provided with some and… it was awesome. So cooling, so soothing, so… so… brilliant.

This discovery came from a ‘needs-must’ experience brought on by lockdown and I wonder how many other things families have had to adopt this approach. Bryanston supports the Blandford Food Bank and whilst helping with taking food parcels last week, I met Jane at the food bank as she was co-ordinating supplies. Her outlook and work ethic were inspiring. People passing by, stopped and put their head in the door asking if they could do anything to help. In amongst the grim news stories we must not forget that there are many, many people doing good things for local communities from medical staff to volunteers, and to those keeping an eye on neighbours and friends. 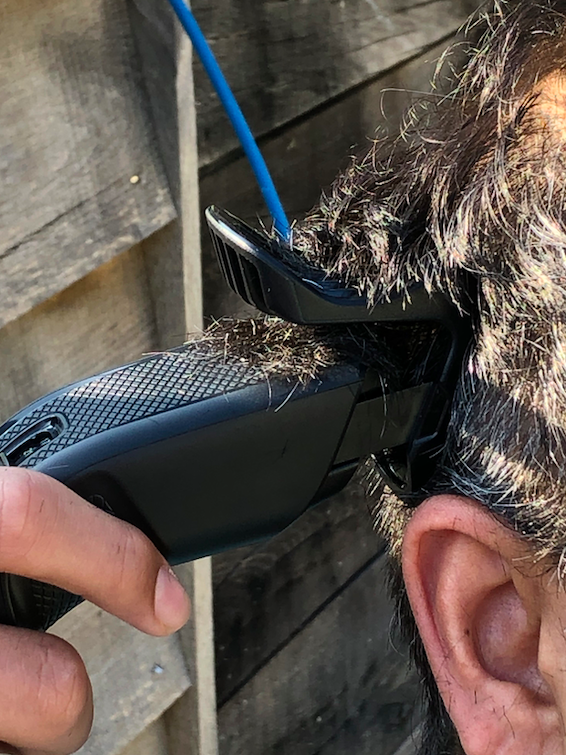 The ‘needs-must’ perspective also led to a complicated personal decision this week as remote video lessons meant that I could either keep my hair the way it currently looks – shaggy, which interestingly accentuates the bald patch, a sort of Tarzan meets Friar Tuck meld – or I would have to have someone in the family trim it with a pair of clippers. The obvious person to ask would be Sarah but then there are years of hand cream jibes to be returned with interest I suspect, and so I asked the boys, both of whom were very keen to show their barber skills, what their creative vision was. There are plenty of YouTube clips on how to cut hair and they were sent to investigate. One returned with a plan to shave a design into the right side my hair, the other with a plan for neat back and sides.

The latter won out. For all my willingness to try new things it is perhaps baby steps that are needed. The same will be true as we find our way forward in a new world of teaching.