Political education in schools is imperative

British politics. Is it broken? 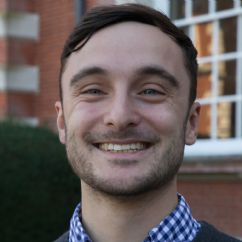 f it’s not yet broken, it’s certainly creaking under immense pressure. So how do we solve it? How do we repair the division and return to the ‘normal’ British politics of the past (if that’s possible or even desirable)?

We’ve all done it. We’ve all got to the ballot with the intention to vote, only to get there, and not really know who to vote for. Some of us haven’t even made it to the polling station for the same reason. Many people only engage in politics through voting and there is the problem: if we don’t even know who to vote for, how can we even begin to solve the deep-seated ills that face British politics?

Who’s who? Who stands for what? What difference does my vote even make? These are some of the most frequently asked questions at the beginning of the A3 (lower sixth) Politics course. But they are also the same questions that are asked by D or C (Year 9 or 10) pupils in PSRE, in conversations in tutorials and by colleagues in the Common Room.

Pupils at Bryanston are enthused, engaged and willing to participate in politics if given the opportunity. The numbers of pupils studying Politics at A level continue to grow year on year; we have a thriving Model United Nations and Debating Society. New initiatives in D activities, The Cabinet (Bryanston’s first Politics magazine) and UK Parliament Week all give pupils more opportunities to participate in politics now than ever before.

As vital as this is, we must go further. In this increasingly volatile and dangerous world, where democracy appears to be under genuine threat, it’s the duty of all of us – teachers, parents and guardians – to be able to uphold the fundamental British values of democracy, the rule of law and tolerance. The real question is this: how can we be expected to uphold this if our own political education is poor or even non-existent?

How can you begin to fix a car that’s misfiring if you don’t even know what a spark plug is? You can’t - you have to learn what the spark plug is, what it does, and how to change it if it’s dead. More than that, you also have to learn that a misfiring car can be caused by more than a faulty spark plug. There isn’t just one answer to one problem.

The Teachers’ Institute taught us the importance of political education as a tool to help heal the divide in politics, and the importance of working with colleagues across a range of schools in order to achieve this.

But it isn’t just in the classroom where we can begin to fix these problems. Engaging pupils in discussion at home, probing their thoughts on the news and asking their opinions about the goings on in our country and across the world is as important.

Discussion lays a foundation stone of engagement that will later become participation. And if Brexit has told us anything, it is that young people have the potential to be a very powerful force in British politics. They may, in fact, even hold the solutions to release the pressure on the political system.