Charlie Covell, an actress and writer, well known for writing the hit TV series The End Of The F***ing World and Banana, recently visited the School. 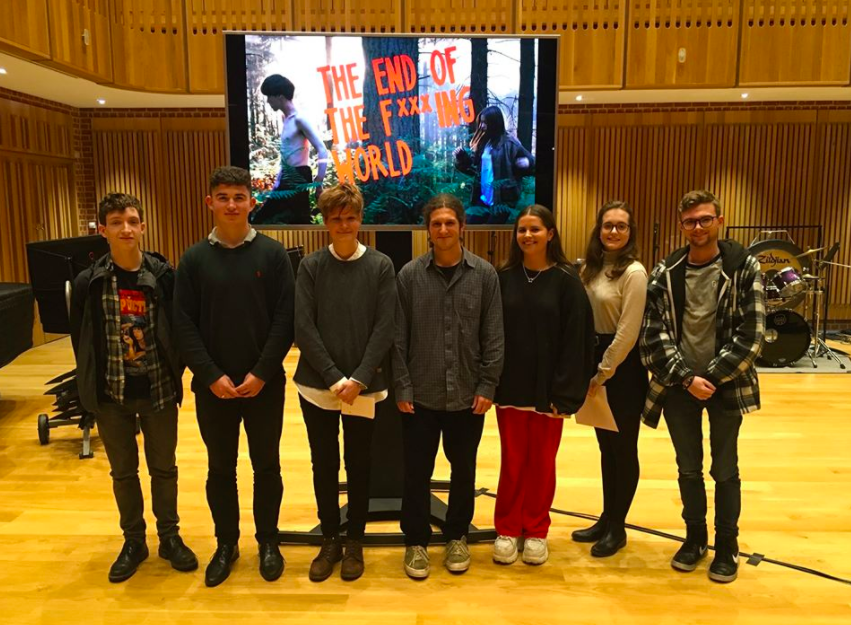 We had the pleasure of interviewing her and in case you couldn’t make her talk, we thought we would write up that interview as she not only provided an insight into the cutthroat world of film but also gave advice that any budding writers definitely need to hear.

WHICH UNIVERSITY DID YOU GO TO AND WOULD YOU SAY IT GAVE YOU A GOOD PLATFORM TO ENTER FILM?

I went to Oxford University. It definitely helped but equally, I still had to work as hard, as everything wasn’t handed to me on a silver platter like everyone expects.

AND WOULD YOU RECOMMEND GOING TO UNI?

I wouldn’t say don’t go to university but you can still find success in life without going.

DO YOU HAVE ANY ADVICE THAT STUCK WITH YOU THROUGHOUT YOUR CAREER?

Always listen to advice people give you and take it as constructive criticism, however brutal it is. Also just get through your first draft, don’t focus on getting it perfect and all the details, just make it through the draft then go back. I would say, though, that personally, my first draft is always my favourite.

WOULD YOU SAY THAT YOUR CAREER IN ACTING INFLUENCED YOUR STYLE OF WRITING?

Yes it definitely did. When I act I like to add my own touches or ask the director if I can change a line, so I’m a lot more open to change and criticism from both directors and actors.

DO YOU FIND MUSIC HELPFUL WHEN WRITING? WHAT WOULD BE YOUR DESERT ISLAND SONG?

I love listening to music when I write, and just all the time. I have playlists for each stage of writing, playlists for each character in the series (especially in TEOTFW), it’s the most random selection as well, ranging from Beethoven to heavy metal.

Desert Island song: This Must Be the Place - Talking Heads.

WOULD YOU WANT TO STAR IN AN EPISODE OF TEOTFW?

I have acted in an episode of Banana, but my passion is screenwriting. I wanted to put all of my focus into that when writing TEOTFW.

WOULD YOU SAY IT WAS DIFFICULT TO ENTER THE INDUSTRY AS AN OPENLY GAY WOMAN?

No, definitely not. At school I was terrified of being gay and it’s great that I am now sitting in a school, much like the one I went to, openly talking about it. If anything, being honest, I would say it was easier, for example the director of Banana Russel T Davies wanted specifically an openly gay team member to work for him.

ARE YOU WORKING ON SEASON THREE

No, because honestly I’d prefer for it to end on a positive note instead of dragging the story out and people starting to get bored of it. Best to leave everyone wanting more!

By Mungo M and Angelica M