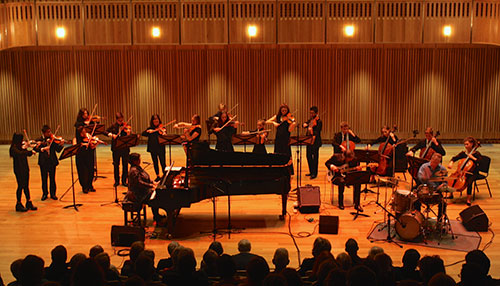 Liane Carroll and her trio provided a wonderful evening of entertainment as part of our professional concert series on Friday 1 May. They performed a number of the tracks for which they are famous, including “Pennies From Heaven” and “Autumn Leaves” and they generously included several pieces that had been requested by audience members. The atmosphere was fabulous from the moment they began and the audience would have requested encore after encore had that been possible! The Bryanston String Chamber Orchestra were lucky enough to play two ballads with the trio: “Calgary Bay” and “You’ve Changed” to open the concert’s second half. Between every song, Liane shared some hilarious jokes and anecdotes and she made very clear just how much she had taken to Bryanston, our lovely new concert hall and the pupil musicians who had impressed her so during the day.