OCEAN BROTHERS ROWING THE ATLANTIC in 2018

OB Greg Bailey (Salisbury 2008) joins his brother, Jude, as the Ocean Brothers team. Together they are planning to take on this incredible adventure to cross the Atlantic Ocean in January 2018, to raise money for the British Skin Foundation.

Why are they taking on this challenge? The brothers' late father and stepfather, Pete Massey, passed away in August 2015 after an arduous 16-year-long battle with skin cancer. One year following his death the brothers made a decision to cross the second largest ocean in the world, in memory of him.

Greg and Jude are doing this completely on their own with no back up whilst at sea, and it could take them up to 11 weeks to complete the challenge.  Their aim is to raise £100,000 in aid of the British Skin Foundation's research into skin cancer. They have put together an amazing short film explaining how they are planning to achieve this and how you can support them. Please do take a moment to watch it:

The Ocean Brothers have also received support from Bear Grylls and Sir Ranulph Fiennes OBE,  to name just a few.  Here is what they had to say:

“It is a huge challenge to attempt this crossing unsupported and I admire the brothers' courage and determination so much. And their support of the British Skin Foundation is so pertinent to many of us. Never give up.” – Bear Grylls, British adventurer

"Brothers Jude and Greg coming together and battling the full force of the Atlantic Ocean on this tremendous voyage for such a moving and deeply touching cause is an inspiration to any family suffering the loss of a loved one to skin cancer. Go boldly into that dark night Ocean Brothers!" – Sir Ranulph Fiennes OBE, the world’s greatest explorer

“Having pioneered ocean rowing and set many on their own course for adventure, challenge and discovery, I wish Jude and Greg more than luck as they battle the mighty Atlantic Ocean. They will need determination, courage and strength and I believe they have plenty of that. To do so to support others suffering from skin cancer and raising awareness and much needed funds for the British Skin Foundation is a noble cause I commend. Inspiring stuff guys; you have my support" – Sir Chay Blyth, CBE BEM

“Good luck Greg and Jude and congrats on taking on such an epic challenge!  I hope in every way it is a success, both in raising money for skin cancer research and awareness of such an important cause." – Andrew T Hodge OBE, ex GB rower, triple Olympic gold medallist and quadruple World Champion

There are many ways you can help Greg and Jude to reach their target and this is explained on their website www.oceanbrothers.co.uk. If you can support them in any way, we know it would be greatly received.  They are also holding an event this month: 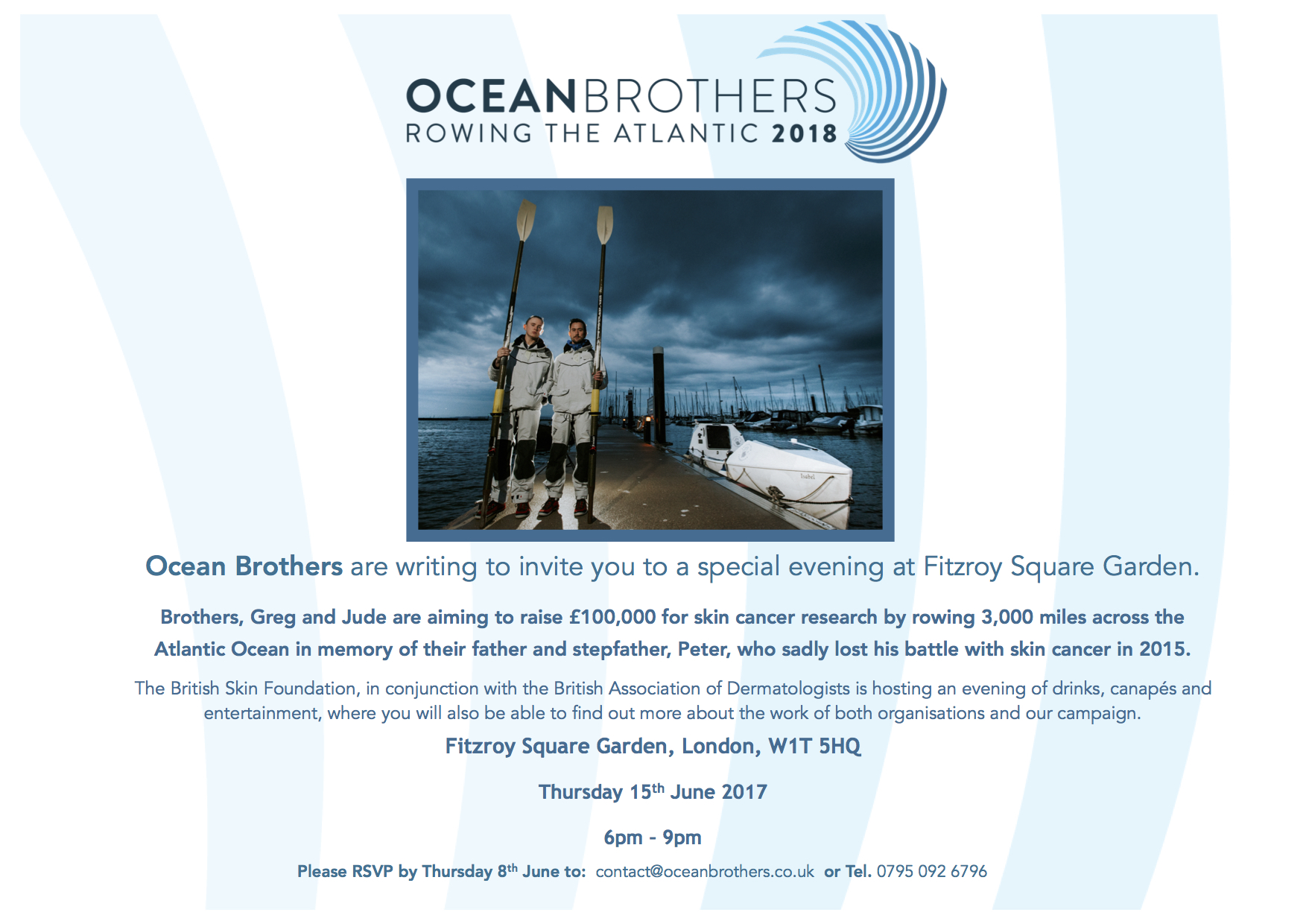 We hope to be able to track the Ocean Brothers on their journey in January 2018.  From all of us at Bryanston, we wish you the best of luck with this amazing journey.