The D Show was a tremendous success again this year, involving every member of the year in one way or another, and embracing the theme of the future. 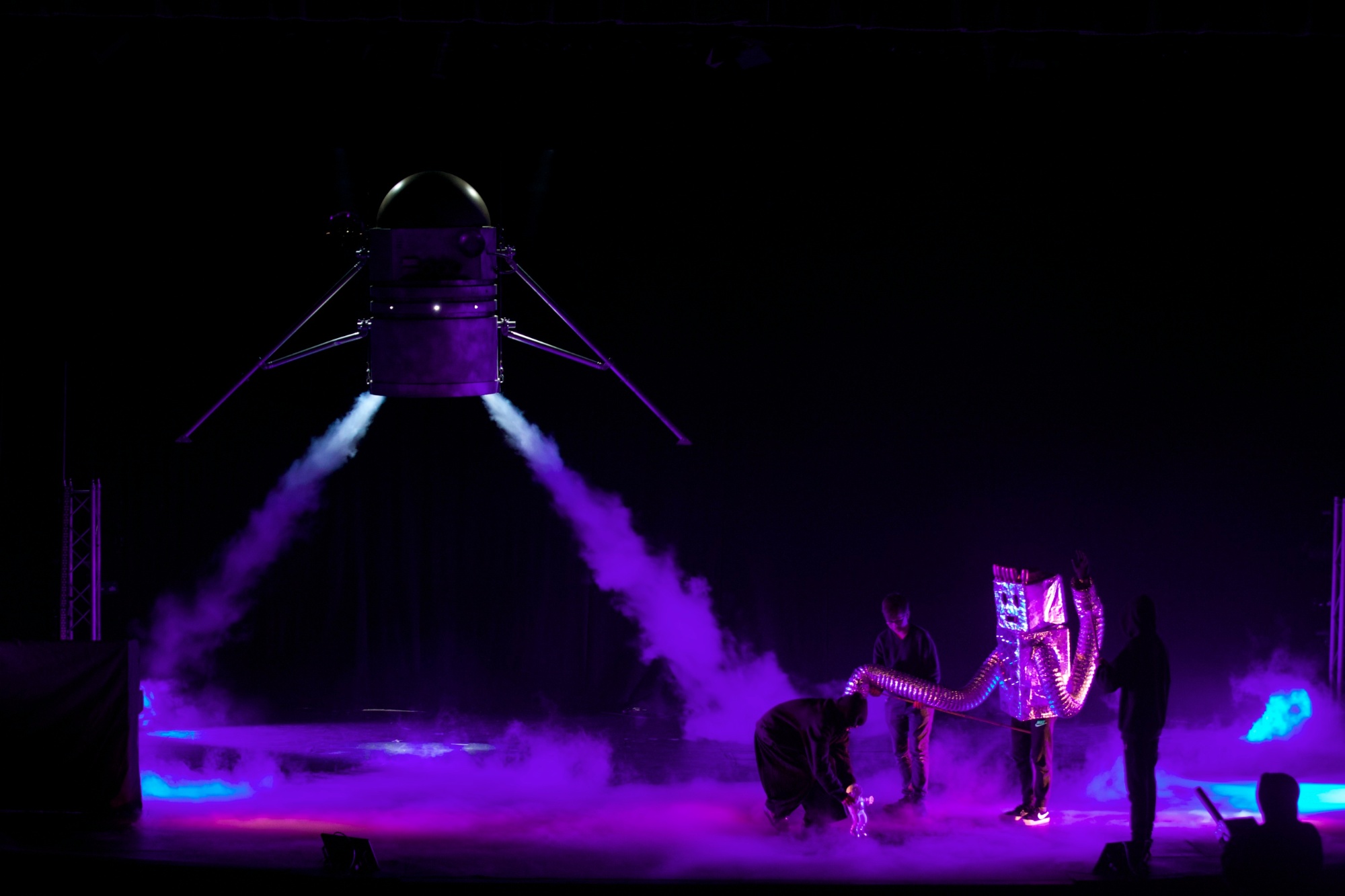 The opening, with a Close Encounters-style descending spaceship, excitingly complete with fire and smoke, benefited greatly from two new Coade Hall staff members, Dave (special effects specialist) and Charlie, both of whom started work at Bryanston within the previous two weeks – a baptism of fire! After that the pupils took over with great effect. A huge robot with extending Mr Tickle arms, made by pupils under the aegis of Monica Sinclair Smith, made its way down the aisle and the evening began. 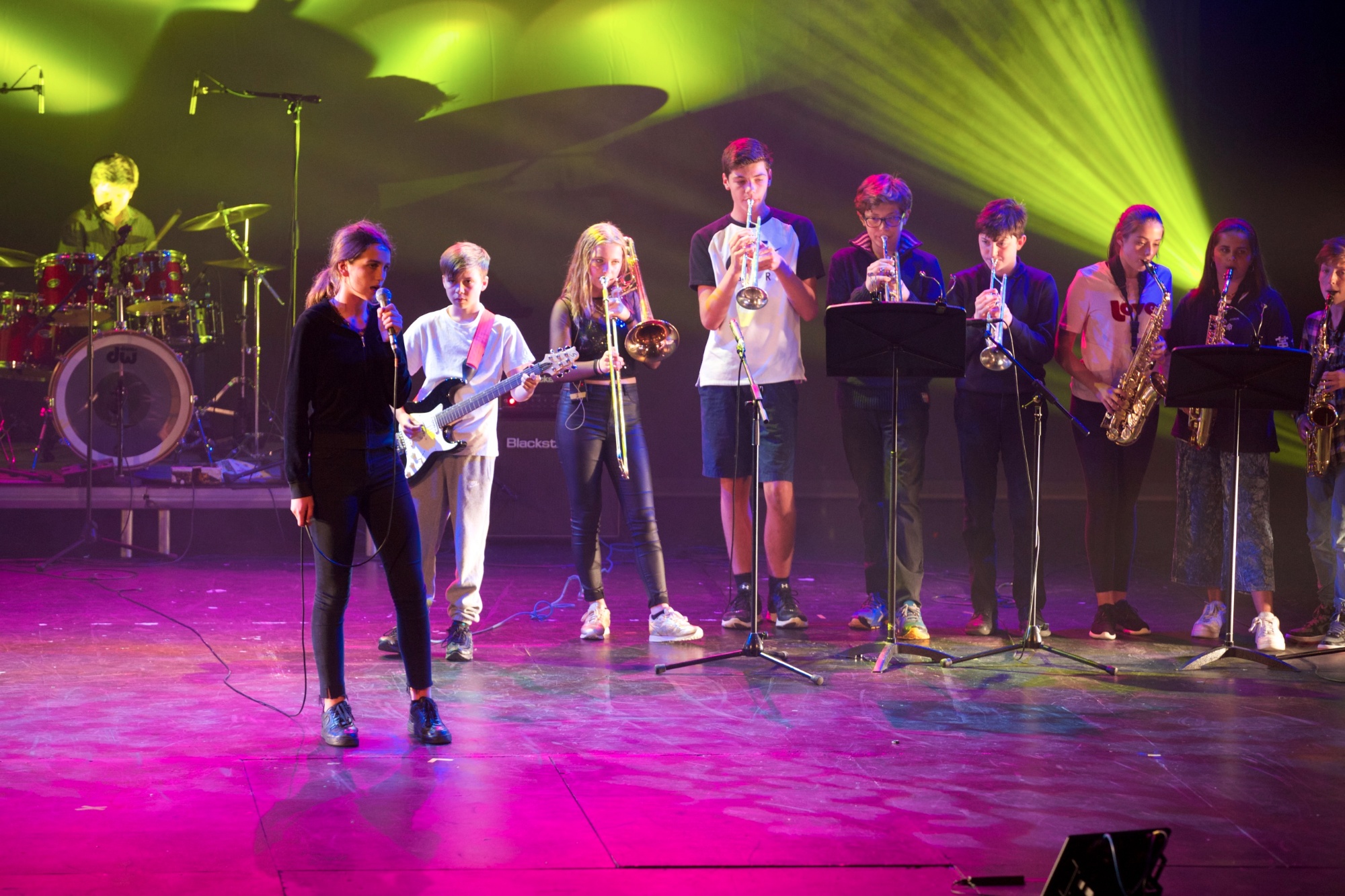 Puppets, robots, the future tense, Star Wars in iambic pentameter, music, drama, dance and films all took a key part in the evening's success. The four presenters, Minna W, Abi C, Theo B and Timur S were confident, poised and professional and there were some superb drama performances from Elin H, Lingling BS, Sylvester M, Amelia S, Aaron PS, Abi C, Millie F, Teagan G, Ollie H, Benson B, and the whole Star Wars team, which it would be unfair to pick stars from. Just let it be noted that Gabe A transformed from R2D2 to Princess Leia in a very short amount of time and Will S was literally cellotaped into his metallic C-3PO costume, which acted as a kind of '70s weight loss treatment. As a result of illness Jai was also transformed from stage crew to Chewbaca on the night. The English Department produced a dystopian news broadcast, which, together with the disturbingly comic Bible reading stand-up number, should hopefully have provided some thought-provoking moments.

Musically, the Soul Band made a stupendous impact at the start of the show, demonstrating to the parents the professional level of the evening, and later items included a superb piano trio with Lingling BS and Iona M, supported by the wonderful Mr Scott; and the D band who took the audience back in time with two numbers performed by Florrie O, Abe L, Alex K and Hugo H. 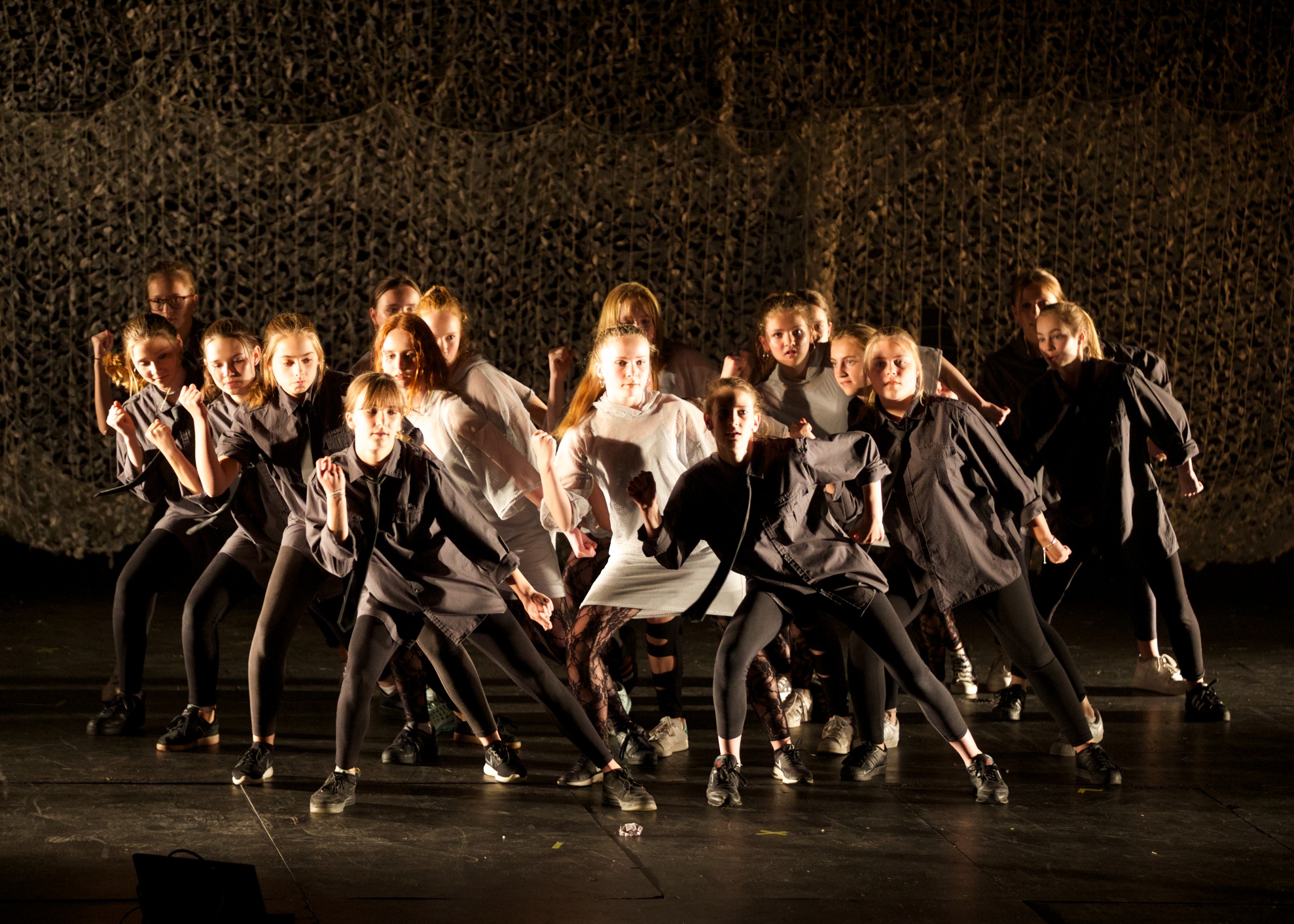 Musical theatre soloist Emilia D wowed the audience with her wonderful voice, and dance groups abounded this year - there was a space age tap duet, a romantic ballet number, a combined street and contemporary number and a boys and commercial jazz number - it is amazing that from just one year, four dance numbers and six different dance groups can take part in a performance, and all with real energy and conviction.

Films this year included a beautifully made account of the rocket making, a brief but accurate window into the skill and effort of rowing and a hilariously bonkers chemistry film, with competitive reaction rates and colour changes, and Timur appeared again, this time in a lip sync film. Some beautiful work was done capturing the preparations of the show on film; and the whole year group embraced the Time Warp from The Rocky Horror Show. 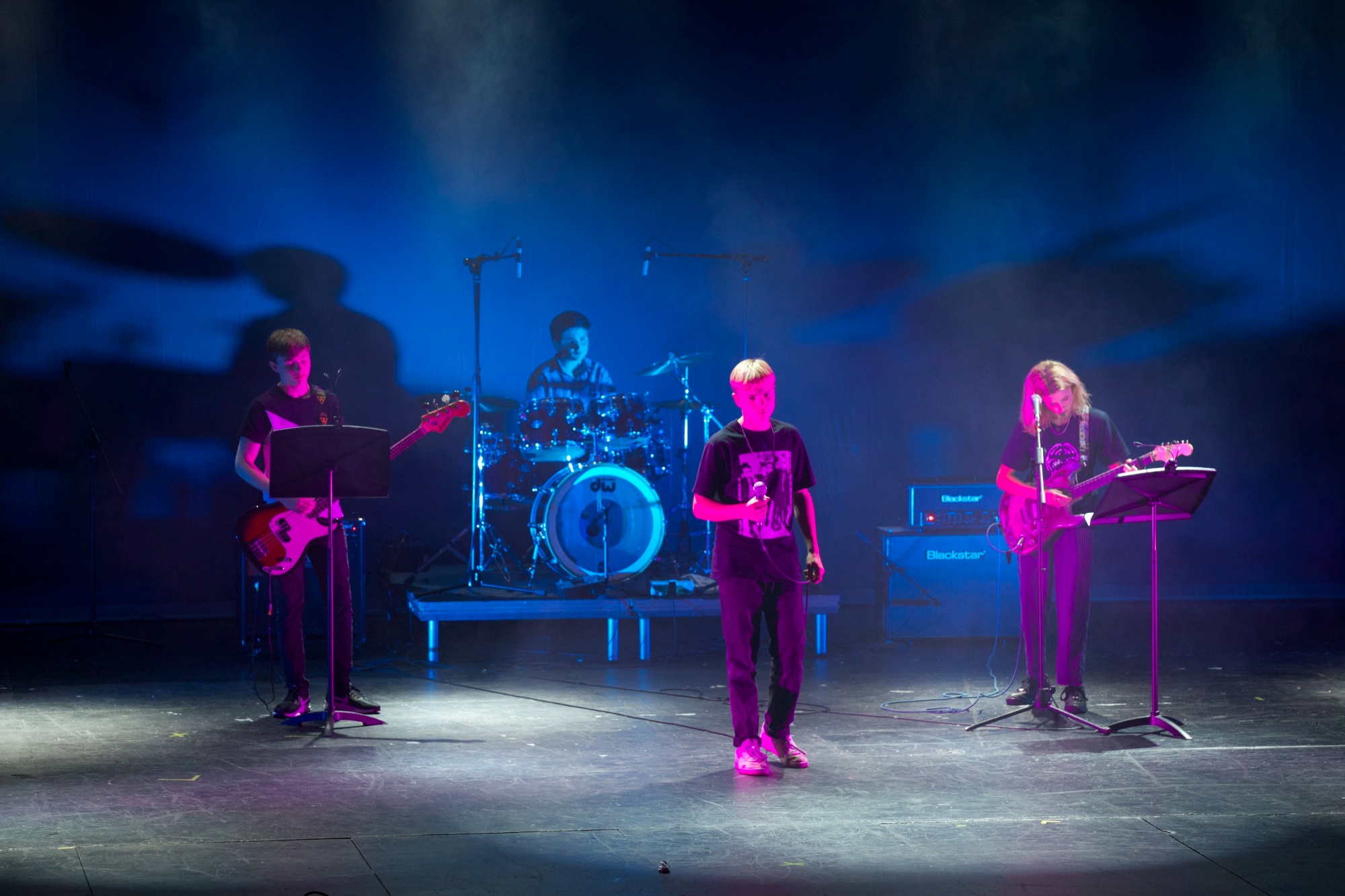 In the foyer, fantastic displays helped get parents into the theme of the evening, with futuristic canapés, make up designs, photography and foreign language forecasts on a tree, which ranged from J’aimerais être riche, to La paix du monde viendra (world peace will come). Photos of all the Ds were also put through an 'ageing' app - definitely recommended, though the jowls you will grow are a bit of a shock to the system. Design and Technology showed off the success of their rocket design and exploration with some exciting launches during the drinks before the show and the English Department booklet of ‘answering back’ poems once again impressed with the creative and analytical response Ds had made to famous poems. 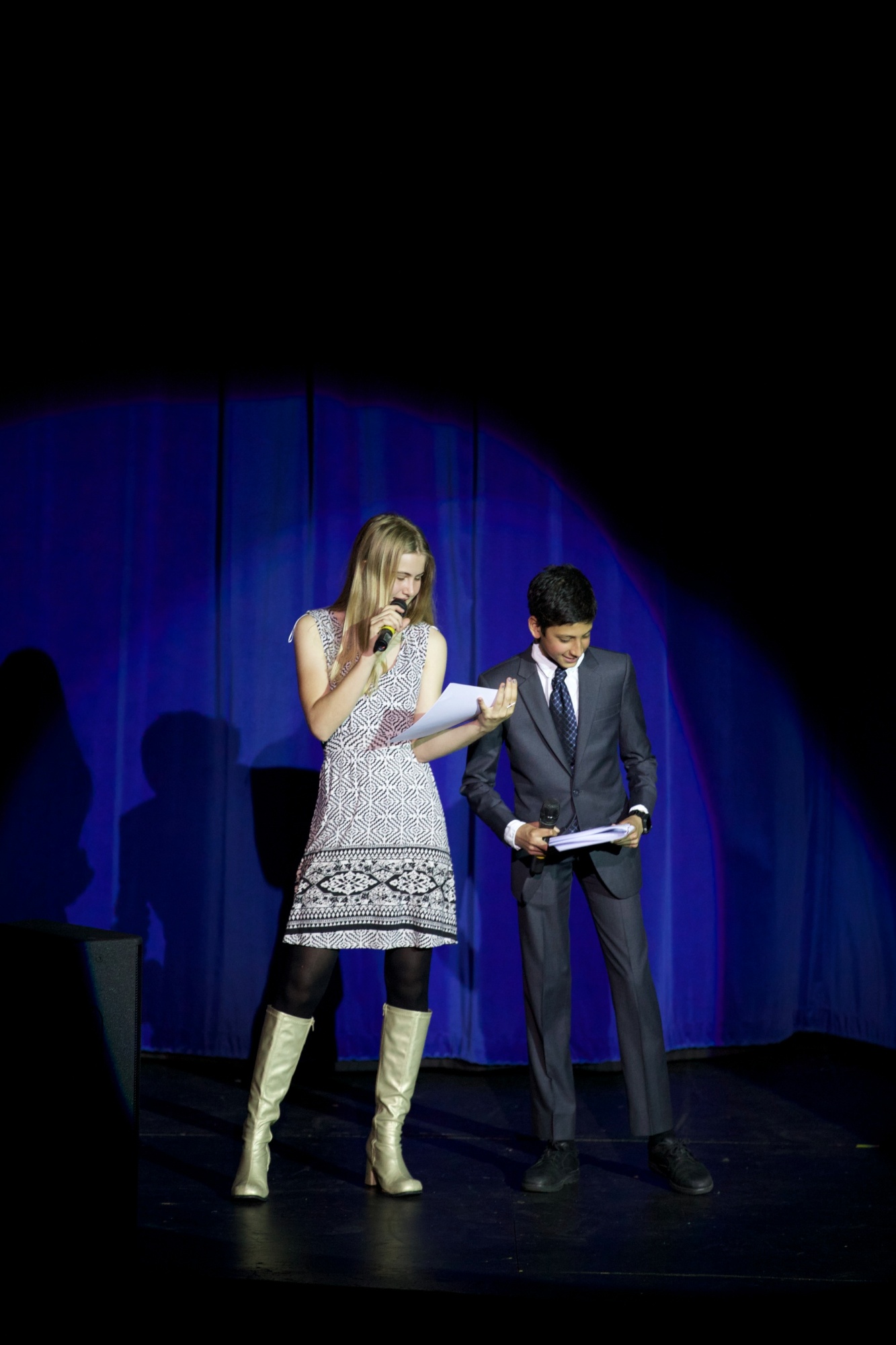 If this show is anything to go by, their A3 Festival will be highly entertaining. Congratulations are due to the whole year, and in particular to those who worked extremely hard on a number of things – Minna W, Abi C, Lingling BS and Emilia D come to mind, and there will be other untold heroes I have no doubt. Thanks are also due to the staff who helped, from Art, Music, Film, Drama, Dance, English, Modern Languages, Chemistry, Photography, Catering, Coade Hall  - and of course the wonderful stage crew under Abby H, Stage Manager. Those Ds who opted to do stage crew for this flew in scenery, moved staging, operated lights and sound and made and handed out programmes and posters, with only a couple of hours of training. A revue, thrown together as it is by definition, requires a backstage and technical staff who are slick and efficient, and this team was impressive!

Well done to Mrs Scott for orchestrating such a mammoth event so early in the term. Thank you all!