At the end of the spring half term the Science Society were treated to an entertaining presentation on the physics of skateboardin by Dr Jonathan Hare. Here is a report from Head of Science Mike Kearney. 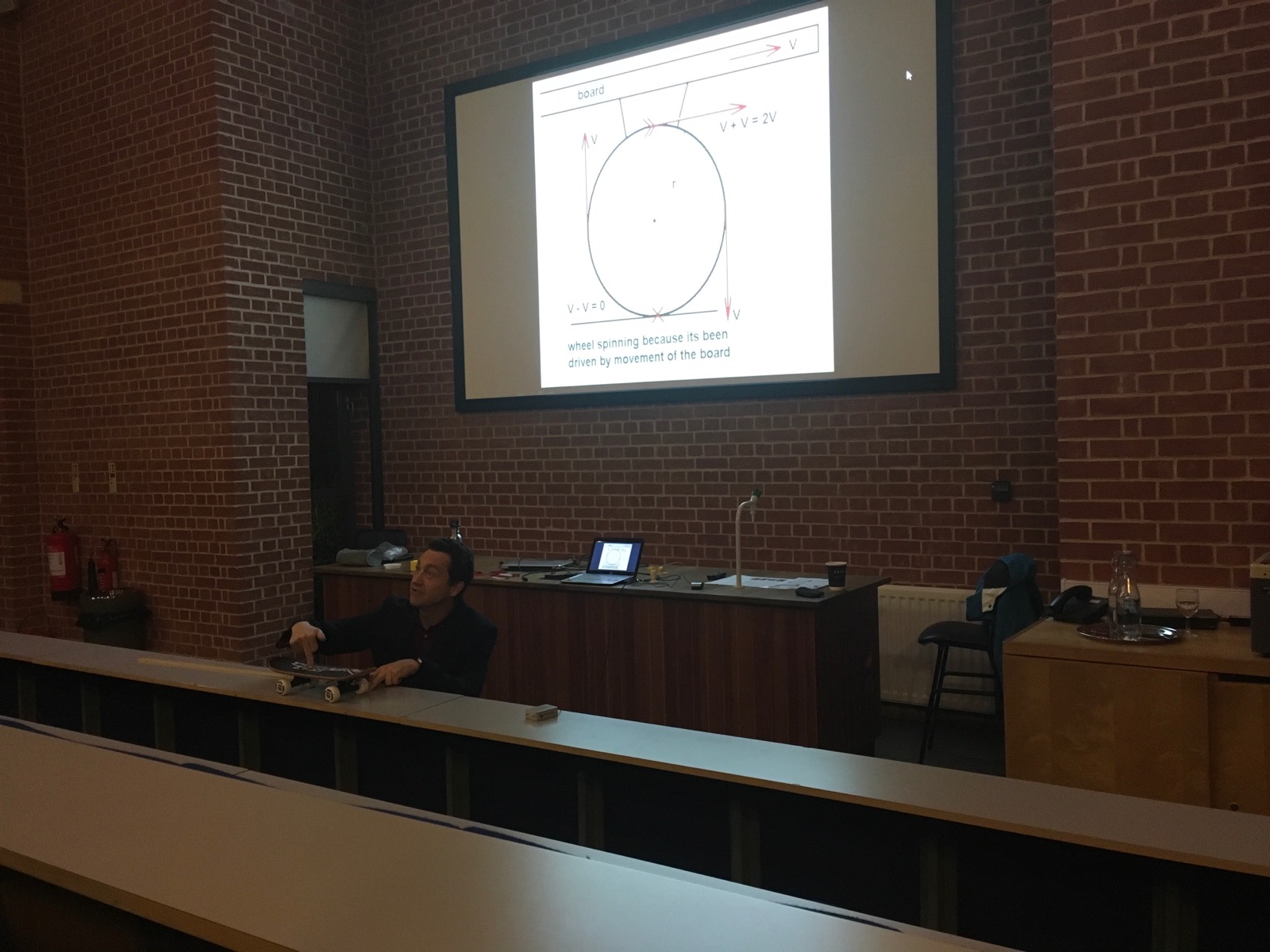 In years of learning about physics at school and university Jonathan realised he had never learnt about the most basic of machines, the wheel.  Longboarding started many years ago as a way to enjoy skating once the snow and ice had melted.  A skateboard is a board with wheels on axles called trucks.  Adjusting your weight enables you to steer.  It can go over bumps much bigger than the wheels because the trucks can move. A few years ago a group of young athletes travelled 1500 miles on longboards through Peru and Bolivia. Check out their adventures on YouTube. Jonathan was in New Zealand giving talks and he travelled around the mountains on a longboard. It's better than a bike … portable, no punctures, you can keep it in a backpack, etc.

Plotting the velocity of a point on the wheel as it goes round results in a cycloid, a series of semicircles with the speed varying from zero to twice the speed of the motion of the skateboard.

Early skateboard wheels were made of wood that split or metal that had no grip until it wore down and became rougher. Now they are made of polymers which consist of long chain molecules made up of repeating monomers. Polyurethane was developed by German scientists in the Second World War because they had no access to rubber supplies. Jonathan wrote an article all about polyurethane in an institute of chemistry magazine available online. It is tough, flexible, can have different hardness, can be cast and machined. Small wheels enable faster responses for tricks but have to turn so fast that friction in the bearings can be a problem. The design of the shape of the wheel surface can enable sliding. Hardness affects the wear and grip, one being gained at the expense of the other.

You cannot normally put brakes on a skateboard because the braking force low down would leave you flying forward. Without brakes, you need to learn how to slow your longboard down. You can jump off. That is OK at lower speeds but a 40kg body at 15 mph has kinetic energy equivalent to that released by a small stick of dynamite. The second method is to drag one foot along the ground. The third method is to swerve and slide losing energy to heat as friction acts on the sideways wheels. But this has to be done at high speeds so learning how to do it and practice is difficult. The speed can be controlled quite finely using this method.

On Jonathan's website, Creative Science, he has plans for anyone to make a speedometer for skateboards. One type flashes an infra-red light onto the wheel.  A mirror on the wheel sends the light back once every rotation which is used to calculate the speed. An update uses a strong magnet screwed onto the wheel which passes a coil mounted under the board and the induced voltage can be used to determine the speed once it is calibrated.

Jonathan sees science as a voyage of discovery and experimenting to see what outcomes may be is a critical, be it in a school or longboarding across South America.