What you learn in Mathematics classes...

Bryanston's Head of Mathematics, Alex Hartley, explains why Maths is more relevant outside the classroom than you might think. 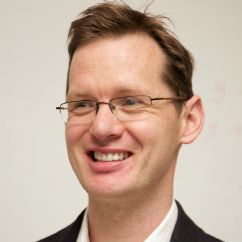 As interesting and enjoyable as it is to use a pair of compasses to construct the perpendicular bisector of a straight line, I do confess that pupils have asked me when exactly they will use this skill in real life. Further, I will even concede that my usual response – that it will form part of their iGCSE examinations – is, in the language of youngsters today, a bit lame. So, in this post I will attempt to explain more generally what our pupils learn through studying Mathematics, and whether or not there is more to it than just getting to the right answer.

With a new class, my first lesson of the academic year in September might well involve what I call the Handshakes Investigation. Working in groups, we establish, by getting out of our seats and getting involved, how many handshakes might take place when, say, three, or four, or another number of people meet for the first time. Building up a table of results for various numbers of people, we might seek to explain the patterns that are evident, refining our thoughts to form an algebraic equation and using this to test and predict future results. There’s a lot in there; elements of teamwork, of identifying patterns in numbers, and predicting and testing future results. At a more advanced level, pupils are generalising a particular rule and hence using algebra to construct a simple yet elegant and powerful formula that can be used not just in the cases already discussed, but many more besides. This investigation is a journey for each pupil and there’s a lot more to it than simply getting to the right answer. It also makes for a richer experience than simply working through problems from a textbook, although there is, of course, a time and a place for that and practice does indeed make perfect. Looking towards a real-life application, it is analogous to the problem of asking how many matches take place in a league in which a certain number of teams all play each other*.

Change in the world of mathematics teaching is approaching, with both the British curriculum and the IB offering new courses within the next few years. Following the Chancellor’s encouragement in his Autumn Statement (2017), we’ve offered Core Maths as an accessible course in the sixth form. Core Maths is entirely based around the practical applications of maths – mainly statistical and financial – that our pupils are likely to need both in their personal and professional lives, regardless of the career choices they make. We’re optimistic that our first cohort of pupils, who are just completing A3 (Year 12), will earn a good set of grades which will contribute to their overall accumulation of UCAS points and may enhance their choices at university. The IB curriculum will soon change too, and mathematics will be split into two subjects; Maths Analysis (which will contain a great deal of algebra and calculus, in common with A level courses), and Maths Applications (which will focus upon the uses of maths in real-life).

What would I do differently, if it were up to me to design the curriculum? Three things. First of all, I’d make iGCSE Mathematics, and particularly the foundation tier, focus more upon the applications of mathematics to real life. More questions about, for example, personal finance and perhaps we’d cope without a pair of compasses. Secondly, I’d insist that everybody studied mathematics at some level in the sixth form (just like in the IB) and finally, I’d set more questions that drew in a range of different skills, because that would encourage pupils to better understand the rich connections between each area of mathematics that they study.

So, there’s a lot to enjoy and savour in mathematics lessons; there is of course a range of skills and techniques which do need to be explicitly taught and practised to ensure fluency. But solving problems, talking things through, and creating and testing ideas is all in there too – and this is true for all pupils, no matter what their prior attainment or ability in Mathematics.

* h = ½ x n x (n+1)  is the formula, where h is the number of handshakes, and n the number of people involved. Relating this to sports fixtures, 20 Premier League teams could play each other in ½ of 20 x 19 = 190 matches, but overall 380 matches are played each season because teams meet both home and away.